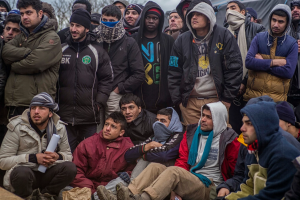 Just days ago, an English judge adjudicating asylum applications said most refugees in the “Jungle” camp at Calais are not “genuine refugees” but are benefit scroungers trying to get to the UK to suck up benefits. (The judiciary around the world seems to attract a disproportionate number of halfwits.)

One of the leading UK charities providing direct service to refugees reports to the contrary. Most asylum seekers are not allowed to work & are forced to rely on state support which can be as little as £5 a day. There’s no need for a currency conversion since it’s chump change in any currency. They cannot choose where they live, are not provided rent money, & are offered mostly ‘hard to let’ rentals that others won’t live in. The majority live in poverty, poor health, & chronic hunger.

That’s why this story is so heartening: Shakespeare’s Globe theater company has been on a world tour for nearly two years, hoping to perform in every country in the world. They never planned to perform in refugee camps but have now performed in several in Jordan, Djibouti, Cameroon, & now in Calais. The artistic director said the sheer scale & tragedy of the refugee crises demanded a response. In Calais, they performed Shakespeare’s “Hamlet.” The artistic director said, “It is a great privilege to play for displaced people in Calais. As a theatre company the only gesture we can offer is this: a show that we hope speaks to the human spirit at its greatest & its darkest moments.” Other theater companies have also performed in the Calais camp, including two British groups (Shared Experience & Complicite) & a Lebanese group (Zoukak) formed after the 2006 Israeli war in Lebanon displaced millions.

Despite bitter cold, 300 refugees in the camp of nearly 6,000 attended the performance. Some of them likely understand English but for those who did not, the troupe provided program notes explaining the plot in Arabic, Farsi, Pashto, Kurdish, & French. One British news report said it was questionable they understood the symbolism of Hamlet. People with English as a first language & have read the play a dozen times usually don’t. That’s the nature of Shakespeare & really not worth mentioning.

It’s reported the opening speeches were drowned out by cheering & that the audience were engrossed throughout the drama.

After the performance, the stage was dismantled to provide material for shelters.

Art matters to the human spirit, especially “at its darkest moments,” not just because it provides dignity & hope but also entertainment & laughter. A tip of the hat to the theater companies for their generosity & solidarity.