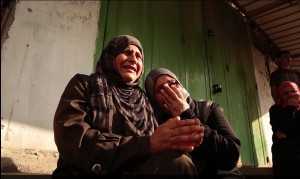 Hasbara is bringing out the heavy artillery now–nothing lower caliber than feminism to justify targeting children in Gaza. It worked so well to justify the US-NATO war in Afghanistan they decided to give it a go in Gaza. They must have complete meatheads running the hasbara operation these days.

An article in the UK journal called New Scientist dated August 1st, 2014 is titled “The reasons why Gaza’s population is so young.” Demographics & babies are always a primary concern to colonial powers. The young represent potential rebellion & in Gaza continued intifada, so Israel & it’s colonial allies keep close watch on just how many kids Palestinians are having.

The article cites a few different studies–one more imbecilic than the next. There’s an unfortunate schnook in Oslo named Jon Pedersen whose academic reputation may never recover from his public idiocies. Our man Pedersen says women in Gaza working outside the home & seeking a career are significantly lower than in other Arab countries “with similar cultures to Gaza.” Presumably Saudi Arabia is not included. Not content with leaving bad enough alone when it comes to idocy, Pedersen elaborates that while women are housebound, their husbands earn more money the more kids they have: “Traditionally, men will get extra wages if they have extra children.” Well that’s not a bad system at all if you have kids to feed, but our man is simply talking through his ass, which is what makes him so suitable for hasbara. The estimated unemployment rate in Gaza due in large part to the Israeli embargo is 41 percent. The Palestinian Central Bureau of Statistics bases that rate on the number of people actively looking for work, not the total number of those unemployed. It’s the embargo, stupid! Not the unwilllingness of Palestinian women to work.

The second study they report was headed by Sara Randall, an English anthropologist, who claims: “Palestinian women are not having lots of children because they don’t know about contraception or can’t access contraception. So one has to conclude that they actually want lots of children.” Randall’s study concluded it was intifada driving the birth rate in Gaza & our man in Oslo agrees. Pedersen says Hamas is urging women to pump out babies “to create a larger army” while Randall acknowledges some measure of oppression (without identifying it’s source as the Israeli embargo) but says “Reproduction is one of the few liberties which remains, & also contributes to the larger goal of increasing the Palestinian people.” How demeaning can you get?

But these foolish studies are small potatoes. Hasbara really thinks it’s using big guns when it quotes the Somali-born Islamophobe named Ayaan Hirsi Ali. You may not have heard of her, though she’s built quite a career hating on Islam, but when you know she married Niall Ferguson, that should situate her politically. Meatheads of a feather creating their own little demographic nightmare. Ferguson is a well-schooled smug fellow, pickled in neoliberal apologetics, & spouting some of the silliest & most loathsome historical theories humankind has seen since “Mein Kampf.”

Ali bills herself as a feminist & if you consider Hillary Clinton a feminist, why not include Ali too? If you think war mongering, religious intolerance, & social hatred are compatible with feminism, why not invite Henry Kissinger to the party?

Hasbara doesn’t give a rat’s ass about feminism or about the oppression of women. Witness the unseemly campaign conducted on Facebook by Israeli women writing pro-war graffiti on their naked torsos to cheer on Israeli bombers & tanks. These attempts to degrade Palestinian women while Israel attempts to exterminate them are unspeakable & feminists around the world need to thunderously denounce this crap for the war propaganda it is.

We don’t concern ourselves with Palestinian demographics; we leave that to the women of Gaza. We don’t care how many kids they have or why. Our job is to defend the women, men, & children of Gaza against ethnic cleansing. And that’s that!

These women are outside the morgue at the hospital in Jabaliya where their family member & 14 others are being prepared for burial after an Israeli bomber took out a school the UN used as a refugee center. Our deepest condolences.