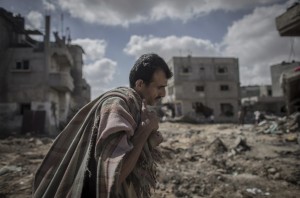 This forlorn man is carrying the few belongings he salvaged from his bombed out house in the village of Khuzaa in central Gaza. He really has no place to go & certainly no place to hide from Israeli bombers & tanks. He’s got no toothbrush, no soap, no clean underwear, no clean shirt & all the comforts & accoutrements of his life are buried in rubble.

Does he know Palestinians no longer stand alone? That over a million people all around the world are in the streets in a thunderous chorus demanding justice for Palestine? Has he heard the news that a historic shift is taking place–not just what they call a paradigm shift but a power dynamic like the movement that helped the Vietnamese people defeat the US military which, until then, seemed invincible?

The bombing is still going on, they’re still recovering bodies & the injured from the rubble, Gaza is grieving & burying the dead, despondence is unavoidable; it will take a while before the spirit of intifada can rise from the rubble & the ashes. But when it does emerge, we need to be there campaigning on every front that forges solidarity: marching, speaking out, touring Palestinians, honoring those who served so admirably in Gaza, & evangelizing for the economic boycott of Israel (barcode beginning 729).

How dare Israel & it’s US & European allies think they could go this far in the age of Twitter & social media when hasbara could be discredited & exposed in a trice & in a million tweets?