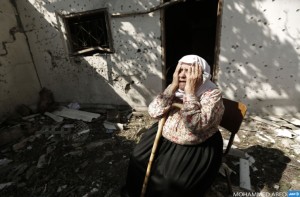 Hannah Arendt’s pithy “banality of evil” always rankled & seemed insular to evil, which is anything but banal–unless you think terror & slaughter vapid. But it might be just the right term to describe Zionist propaganda spewing out of media: from the “radical empathy” of the liberal Zionist rabbi who wants a more humanitarian ethnic cleansing & less swearing by Palestinians in objecting to the murder of their children–to the crap pouring out of The Times of Israel, a right-wing tabloid only a few years old that likes it’s ethnic cleansing decisive & without apology.

Last week, The Times of Israel published a call for genocide in Gaza but advisedly withdrew it–too late to escape condemnation. This week, they published an article titled “Does This War Make Me Look Fat?” by a Zionist from Brooklyn, NY named Rachel Weinstein. Weinstein has a weight problem & says she deals with the stress of war in Gaza by stuffing herself with chocolate. This traumatized daughter of Zion, who has no place being there in the first place, took a Facebook poll of other Israelis: “Eating more or eating less because of the “situation”?” Binge eating & gaining a few pounds were the big concern. And here we thought it was those Hamas rockets.

Dare we suggest Weinstein’s waistline is not the worst of her problems? Should we suggest modifying Arendt’s epigram to “the evil of banality”? Or is this just more documentation of the deep psychosis inherent to an ideology that holds one group of people superior to all others, that teaches hatred & elitism toward others? When we say Zionism is cultural dry rot, Rachel & the rabbi testify to that indictment.

Weinstein’s light-minded attitude toward genocide is all the more repugnant because Palestinians in Gaza are kept on starvation rations by the Israeli economic embargo; Israel actually calculates the minimum amount of calories allowed per person in Gaza.

While Weinstein & other Israelis traumatized by extra pounds commiserate on Facebook, this elderly Palestinian woman in Gaza sits weeping after an Israeli bomb took out her house & killed three members of her family (yesterday). Ten other people died when Israel bombed another school serving as a UN refugee center (also yesterday).

When Palestinians demand a democratic secular state where Jews & Palestinians can live in peace, every still sane Israeli should grab that proposal & fight for it with all their might before Israel collapses from its own internal rot & social hatred.