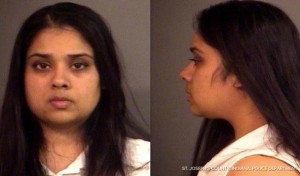 US women are officially putting out a call to the armies of the world to form an alliance like US-NATO in Afghanistan & invade this country by land, sea, & air to save American women from right-wing & Christian fundamentalist persecution. US tribal warlords in the 50 states are competing with each other to see which one can do the most damage to women’s reproductive rights. The emancipation coalition should try to establish a beachhead in the state of Indiana (rhymes with ISIS) & proceed from there posthaste to Texas where the legislature is a hotbed of Al-Qaeda.

Indiana (rhymes with ISIS) has outdone itself by prosecuting, convicting, & sentencing 35-year-old Purvi Patel on March 30th to 41 years, 20 to be served in prison, for the crimes of feticide & neglect of a dependent. The verdict doesn’t even make sense: Patel is charged with murder of a fetus & with neglect of a newborn. Patel claims she had a miscarriage; prosecutors claim she attempted to self-induce an abortion. There are many family & social reasons women would not seek pregnancy counseling for physical or mental care & we regret the pregnancy was so stressful for Patel. But she had every right to terminate that pregnancy without the state of Indiana intervening with their misogynist laws.

There’s no need to legally parse Indiana’s feticide law making not just abortion but also miscarriage a felony. It needs to be defeated. There’s not much purpose to parsing the idiocies of the prosecution case & the verdict. It needs to be reversed. You don’t have to like abortion to oppose this verdict. You just have to believe women have a right to determine if & when they have a child.

The racist character of this case should not be ignored. In another Indiana case, a Chinese immigrant was arrested & charged with both feticide & murder for attempting suicide while pregnant. She spent a year in prison & another year under house arrest wearing an electronic monitor before massive public outrage got both charges dropped. A 2013 study on arrests of pregnant women in the US found that about 71 percent were low-income women & 59 percent were women of color.

Patel is the first woman in the US to be charged, convicted, & sentenced on a feticide charge but she won’t be the last if this verdict is not overturned. Please sign & share this petition demanding Indiana overturn the conviction of Purvi Patel: http://action.rhrealitycheck.org/page/s/condemning-indiana