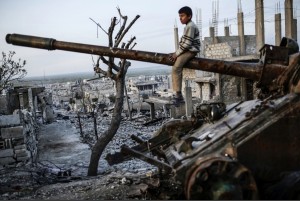 This young Syrian Kurdish boy is playing on a destroyed tank overlooking Kobanî, a town in northern Syria within sight of the Turkish border. From September 2014 to January this year the city was under siege by the Islamic State as part of its campaign to establish an Islamic caliphate across parts of Syria & Iraq.

During the siege, an estimated 200,000 residents from the region who are majority Kurdish fled for refuge to Turkey which would not allow them to enter with vehicles or livestock. The regime also played politics with Kurdish militia defending Kobanî by refusing for several weeks to allow arms & fighters to cross through Turkey into Syria.

After months of siege, Kurdish forces, including hundreds of women fighters, routed the counterrevolutionary thugs of the Islamic State who were armed with mortars, tanks, Humvees, AK-47s, rocket & grenade launchers, anti-tank weapons, howitzers for launching explosives, anti-aircraft guns & missiles, infrared homing surface to air missiles, & machine guns. The US dropped eight airstrikes on the city & would like to take credit for the rout.

This photo is the aftermath of the siege, leaving Kobanî unrecognizable. The way to defeat the Islamic State is not with US bombers but popular uprisings against their barbaric violence–though the question remains: who the hell is supplying the Islamic State with that heavy arsenal worth millions?

This image of devastation stands as an indictment of the role played by the Islamic State & the US–the two phalanxes of counterrevolution in the Middle East.