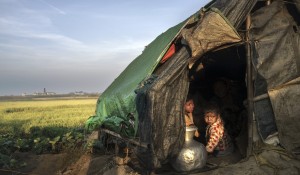 Nearly one & a-half million Rohingya Muslims in Myanmar have been subject for decades to violent state-sponsored persecution & discrimination conducted by the military. The persecution & ethnic cleansing which has been relentless includes denial of citizenship (though they have lived in the region for decades); religious persecution; forced labor; land confiscations; arbitrary taxation & various forms of extortion; forced eviction & house destruction; restrictions on travel for health & work; restrictions on marriage, education, & trade.

The Myanmar regime tries to portray the persecution of Rohingya as a conflict between Buddhists & Muslims which can explain some of the assaults on persons & property but not things like denial of citizenship & all the rest of state-sponsored oppression–along with incitement to personal violence.

The violence is so extreme & sustained going back decades that hundreds of thousands of Rohingya flee for asylum to Malaysia, & to squalid refugee camps in Thailand & Bangladesh. Bangladesh has long been trying to deport the thousands living in refugee camps, has subjected them to harrowing human rights violations, & refuses to accept new refugees, with border guards turning back boats of Rohingya refugees. There have been several reported incidents of Rohingya refugees to Thailand being towed by the military in dilapidated boats & abandoned on the open sea.

The violence has also displaced thousands within Myanmar, forcing them into squalid, run-down camps. An estimated 140,000 now live in the camps, including these little boys in a camp near Sittwe, in the state of Rakhine, where Rohingya are 80 to 98 percent of the population.

One thing that makes the violence of Buddhists against Muslims so deeply disturbing is that the first monk to protest British colonial rule in Myanmar & the monks who initiated opposition to the military dictatorship in Myanmar in 2007 originated in Sittwe.