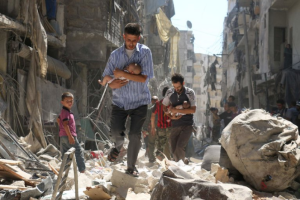 Isn’t it remarkable after 5-1/2 years of massive bombing in Syria, that western media with high-level contacts in the US government still routinely report that entire cities, including hospitals, marketplaces, & residences, were bombed “either by Russian or Syrian warplanes”?

The US Pentagon has the most high-tech satellite surveillance system in the entire world. So high-tech that they can watch the assassination of Osama bin-Laden from a war room in the Pentagon or target an individual they consider dangerous with a drone attack. And yet, they dummy up when it comes to who is bombing what in Syria. If Russia & Syria are being falsely accused, Russia also has high-tech surveillance systems–just as sophisticated as the US Pentagon.

US media, including the NY Times, never think to question that? Or are they just doing their usual job of obfuscating what the hell is going on because deceit & confusion serve the US political agenda?

The cease fire in Syria brokered by the US & Russia begins today. Most of the details remain secret & we have to take the word of Russian diplomats that Syria agrees & will comply with it. This is not the first cease fire negotiated between the US & Russia for Syria. Kerry, under advisement from Henry Kissinger, brokered one in September 2013, two years before Russia entered the war militarily.

It isn’t that these negotiations & cease fires are just political theater but that they are politically fraudulent. What is really being brokered in secret are devil’s pacts & intended to confuse antiwar forces who have not disappointed in the depth of their confusions. The devil in these pacts is in the details of the secret parts.

What antiwar forces should be able to agree on is a demand that the cease fire be permanent on the part of all military forces now intervening in Syria. No to US, Russian, & Syrian bombing.

These men are rescuing babies after an airstrike in Aleppo yesterday. Media reports say either by Russian or Syrian bombers.