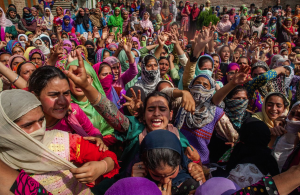 (Photo from Kashmir Today)
Today Muslims around the world celebrate the festival of Eid al-Adha (Festival of the Sacrifice) celebrating the willingness of Ibrahim to sacrifice his son. It has a particularly cruel irony for Kashmiris who are not celebrating but instead grieving & burying their beloved killed by the Indian occupying army.

In the past 66 days of the siege, they have buried 84 people, some from pellet injuries, some from live ammunition, some from being beaten to death, some from other violent causes.

This is the funeral yesterday in Srinagar of Javaid Ahmad, a 23 year-old man who died in hospital from being shot in the leg by soldiers on August 5th during a protest at Narbal. It took a while to determine that he wasn’t Javaid Ahmad, the older brother of 30 year-old Shabir Ahmad Mungoo, the teacher brutally beaten to death by soldiers on August 19th in midnight house invasions in Khrew. Two brothers of Shabir named Zahoor & Javaid were among the many others severely beaten & both were treated in hospital for multiple broken bones.

There is no report that either Zahoor or Javaid died from their injuries. But there are reports of how violent those home invasions in Khrew were, including drunken soldiers carrying knives, iron rods, & axes. It would be a mistake to attribute the reign of terror to drunkenness since it was almost certainly orchestrated from military headquarters to terrorize & as a form of collective punishment. Such gruesome rampages are the realities of the Indian occupation of Kashmir.

The top photo of Javaid’s funeral from Yahoo was headlined “Tensions continue in Kashmir,” “Tensions” is such a delicate & altogether dishonest way of describing a brutal military occupation. The two bottom photos from Kashmiri media show the funeral cortege/protest accompanying Javaid’s body to burial.

Our sincere condolences to the families of all who have lost sons & daughters in this barbaric siege. May the deceased Rest In Peace.
Long live Intifada. End the occupation. Self-determination for Kashmir.