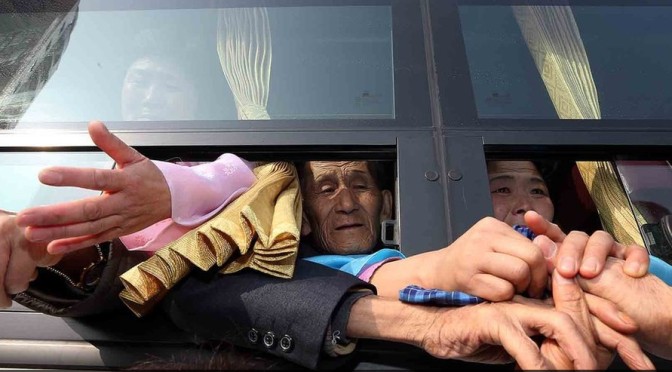 The nastiest feature of US & European propaganda against North Korea is not how they demonize its leaders–it’s inarguable that North Korea is a tyranny run like a feudal fiefdom (while the US considers South Korea a colonial military outpost). The nastiest feature is how propaganda draws on the most vile & racist stereotypes of Asians by portraying North Koreans as commie-bots, emotionless, stoical, obedient, showing emotions only in unison & on cue, & goose-stepping their way through every human activity.

The next time you hear the US saber-rattling with nuclear weaponry against North Korea, keep this poignant image in mind: North Koreans on the bus hold their South Korean family members’ hands after seeing them for the first time in decades at the Separated Family Reunion Meeting at Diamond Mountain in the North.