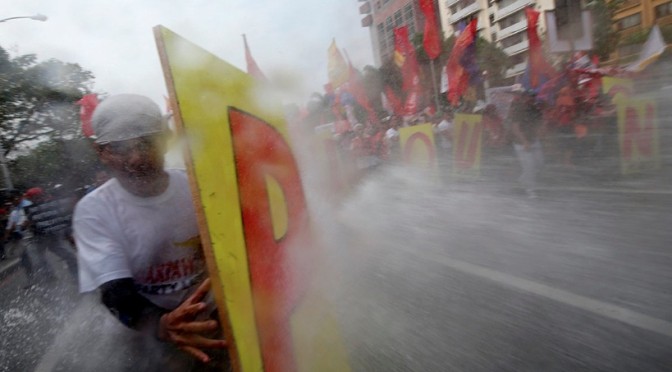 The Philippines aren’t the biggest country in the world but their working people must rank among the most combative in the world. We’ve seen repeated pitched battles between riot cops & slum tenants resisting eviction. Every time a US president visits the Philippines, there are ferocious street scuffles between antiwar activists & riot cops.

The water cannon, an extremely dangerous assaultive weapon, is always used against protestors & in one memorable protest the activists wrenched it away & turned it on the cops. A memorable moment; also hilarious.

Here water cannons are used against antiwar activists moving toward the US embassy in Manila to protest the upcoming visit of Obama. Activists are demanding the withdrawal of US troops in the country under a Visiting Forces Agreement (VFA) the US has with the Filipino regime. The VFA establishes the terms of US military presence. The most contentious provisions in these VFAs is always about civil & criminal jurisdiction over military personnel–that is, whether the jurisdiction will reside in Philippine courts or with US military courts (similar to the dispute Afghan president Karzai is having with the US over the Bilateral Security Agreement). We do more than tip our hats to these brothers & sisters; we offer them our deepest respect & solidarity. US out of the Philippines!