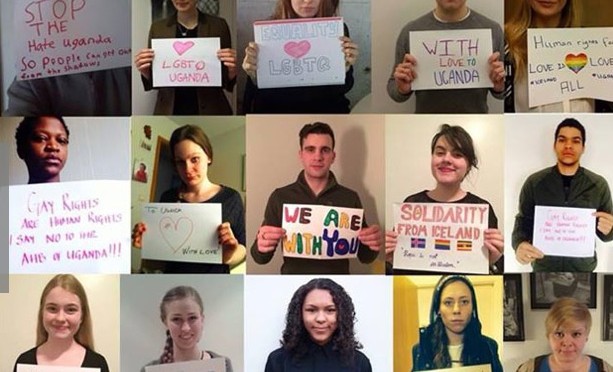 Ugandan president Yoweri Museveni predictably signed the antigay bill into law today just six weeks after Nigerian president Goodluck Jonathan signed a ban on homosexuality into law. The legislation in Nigeria triggered an outbreak of antigay violence which is exactly what it was intended to do–& it will have the same effect in Uganda.

Museveni who claims he sought scientific counsel on homosexuality said, “Homosexuals are actually mercenaries. They are heterosexual people but because of money they say they are homosexuals. These are prostitutes because of money.” His mangled rhetoric may be the result of his evangelical habit of speaking in tongues not cited in the lexicon of human languages & is only matched by his ignorance & social hatred. They’re more akin to a grunt–or even a fart.

He doesn’t know when to shut up because he went on to take issue with gay oral sex in lurid terms, claiming it gives you worms. Hopefully Uganda won’t ban sex education because our man knows less about sex than a US middle-school kid–& that’s saying a lot about his ignorance.

Reports mention the “fierce criticism” Museveni is receiving from US politicians like Obama & John Kerry. Obama described the law as “morally wrong,” Kerry said he was “deeply disappointed,” White House spokesperson Jay Carney called it “abhorrent,” NSA advisor Susan Rice said its passage was a “sad day for Uganda.” There are two pound Chihuahuas that pack a bigger bite.

Our fullest solidarity with the LGBTI people of Uganda & Nigeria–& Arizona, USA.