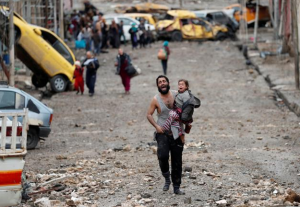 The media caption to this photo taken on March 4th reads: “A man cries as he carries his daughter while walking from an Islamic State-controlled part of Mosul towards Iraqi special forces soldiers during a battle in Mosul, Iraq.”

Kind of suggests he is fleeing into the arms of the salvation army when what he is more likely fleeing is a war zone being bombed & shelled because there are ISIS fighters in the area.

It isn’t one whit conciliatory toward ISIS to say that bombing civilians is not the way to fight them. There are options to that method which include arming civilians to defend themselves. US military intervention in Iraq has created this problem & is no part of the solution.

US out of Iraq now!