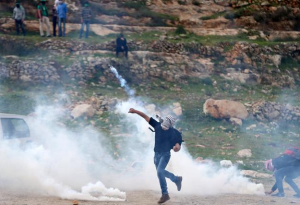 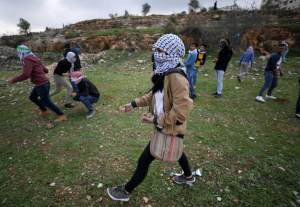 Palestinian Intifada: these are Palestinians protesting today outside Israeli’s Ofer Prison near the West Bank city of Ramallah. It’s a frequent place for protests in defense of Palestinian political prisoners warehoused there. Just as frequent, the protests are attacked by Israeli soldiers.

Ofer is built for 800 prisoners but now houses 1,250 Palestinians, including many kids & many under administrative detention, meaning indefinitely without charge. There are many reports by human rights agencies of abuse of children who are mostly there for throwing stones.

You look at photos of Palestinian Intifada–or Kashmiri Intifada–& marvel at the intransigence & courage of resistance to occupation & colonialism. But what can never be lost in admiration is that this is not the way life should be for young people: having to defy military brutality while maligned as haters, terrorists, & suicide bombers. These young people could be writing poetry, novels, plays; they could be singing in a chorus or playing in a band; they could be inventing & pioneering breakthroughs in science or new cures for human illness. They could just be living peaceful, happy lives. Instead they’re on the front lines of struggle for survival against the mightiest military forces on the planet.

We owe these young people everything. Mostly we owe them solidarity. Build & honor BDS–the cultural & economic boycott of Israel. Buy nothing that begins with barcode numbers 729.