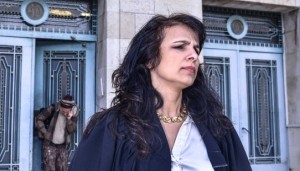 Marx is famous for saying that history repeats itself, first as tragedy & then as farce. And this case is an example of how neoliberalism, the barbaric phase of capitalism, has made it impossible to distinguish between the two.

Last Monday, after a six-week trial, a US jury in a Manhattan federal court ordered the Palestinian Authority (PA) & PLO to pay more than $218 million in damages for “providing material support to terrorists” in attacks on Jerusalem over a decade ago. The law suit was on behalf of ten US families suing over six attacks attributed to Hamas between 2002 & 2004 that killed 33 & injured over 450. There is as yet no explanation for why the PA was sued rather than Hamas. Maybe because Hamas would spit in their eye?

Reportedly the award could be tripled under the US Anti-Terrorism Act which allows US citizens injured by acts of international terrorism to pursue damages in federal courts. Of course, the US also defines what “international terrorism” is & who is engaging in it. The PLO & PA are expected to appeal & hopefully they will after they piss on such belligerence & nonsense. Reports say it’s unclear if the defendants will be able to collect. How about acknowledging they have a snowball’s chance in hell of collecting?

The attorney behind this legal foolishness is Nitsana Darshan-Leitner, an Israeli who founded Shurat HaDin law center in 2003 & which maintains a tight relationship with the Israeli government. While they engage in ethnic cleansing, she engages in what is called “lawfare” bringing suits on behalf of ‘terror victims’ against “Islamic & Arab groups engaged in terror attacks”–that is, Palestinian groups, their political leaders, & who she considers their financial patrons.

She’s a Zionist zealot & nutcase which has made her a media celebrity on Israeli, European, Canadian, & US radio & TV. But this strategy of hers is going to become an important impediment for Palestinian solidarity, which is what it’s intended to do since there is little chance most of the numerous law suits (including against banks) will reap much in actual damages. The intention is to discredit Palestinians as terrorists for defending themselves against ethnic cleansing, to tie up the resources of Palestinian groups, & to vilify Palestinian supporters as advocates of terrorism. She also wants to obstruct Palestinian access to the International Criminal Court. It is only a matter of time before Shurat HaDin begins targeting boycott (BDS) groups around the world.

There is an analog with the right-wing anti-abortion movement in the US which has used assassinations, paramilitary blockades at clinics, endless legislative initiatives in states, & even more silly-assed court actions to thwart abortion rights. This multi-faceted nonsense has reaped considerable benefits & strengthened the anti-abortion movement, especially in the absence of a defense by women’s rights groups.

One disturbing feature of these law suits by Darshan-Leitner’s law firm is her admission in an interview that she was schooled personally by the Southern Poverty Law Center (SPLC). This is not the first time the SPLC has been accused of facilitating Zionist projects. They have been criticized sharply for identifying antisemitism with anti-Zionism & have not refuted that criticism.

Led by Darshan-Leitner, Shurat HaDin is modeling her strategy on the SPLC strategy of bankrupting who they define as hate groups, like the KKK. But the question is, what gives SPLC the authority to define who is a hate group if they cannot (or will not) distinguish between antisemitism & anti-Zionism? If their commitment is to Israel, will they eventually place BDS groups on their hate list?

The only way to outflank this political treachery is to build Palestinian solidarity by evangelizing for the economic & cultural boycott of Israel (barcode beginning 729); holding teach-ins & forums on Palestinian’s just claims; & rallying to demand “No aid of any kind to Israel!”