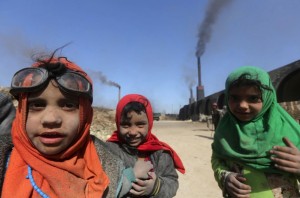 The children are facing a brief lifetime of respiratory, cardiovascular, skin, & eye diseases including bronchitis, asthma, pharyngitis, coughing, fibrosis, emphysema, rhinitis. These hazards have been well known for over 100 years. But in the hellhole the US war has created in Iraq (& Afghanistan) the welfare of children & safety protection of workers is of no concern.

Saddam Hussein was rightly excoriated for violating human rights in Iraq, including secret police, torture, mass murder, forced disappearances, summary executions, chemical warfare. And that differs from US occupation, how? One can’t judge a country by its laws or certainly by what it proclaims itself to be, but under Hussein children were required to go to school at six years of age & education was free through university. Iraq received UN awards for the high level of literacy, especially among women.

Statistics on child labor under Hussein are not available for comparison but over a decade ago (2004) a UN & Iraqi study showed that more & more children were leaving school to work, often as the sole wage earner in the family due to parental death, disability, or unemployment–& of course, because that’s the neoliberal capitalist way of doing things. According to that study, nearly 1,300,000 children, between eight & 16-years-old were working. Multiply that by the eleven intervening years, since things have not improved one iota but only worsened.

The UN-Iraq report informs us that the main reason for child labor is poverty. The damn fools needed a study to tell them that!? According to official statistics, about 25% of Iraqis live below the farcical World Bank poverty line of US $1 per day. To get a more realistic assessment of poverty in Iraq, double the official statistics.

What’s wrenching is that well over a million kids work in often hazardous jobs, like the brick workers, & are subject to sexual abuse & violence. Some experts claim there is a strong cultural push for child labor in Iraq, that parents don’t want their kids to attend school & prefer them to start work young. Oh really? How far back does that cultural thing go? And can we get the names of those unidentified “experts” so we can have their heads examined?

Statistics on the number of children killed, maimed, starved to death by US/UN sanctions & war have been documented & 19 years ago were estimated at 500,000. When you update those figures & add in those mangled & traumatized by war, we’re looking at a lot more indictments for US war crimes. These victims were even acknowledged with pride by the despicable Madeleine Albright who said on public TV in 1996 that the gruesome deaths of those children was “worth it” to achieve US military objections. We look forward to dumping her in a grave & writing her obituary.

Join the spring actions against US war demanding “US out of Iraq!” “US out of Afghanistan!” Our fullest solidarity with the people of Iraq & Afghanistan.