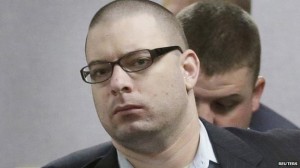 A Texas jury pumped full of patriotic fervor & other idiocies found Eddie Ray Routh guilty of capital murder in the shooting of American Sniper Chris Kyle & Chad Littlefield. A judge sentenced Routh to life without the possibility of parole.

It could be argued that Routh didn’t stand a chance in that kangaroo court. His goose was cooked after Clint Eastwood put out that malignant piece of war mongering glorifying the psychotic Kyle. What chance did a guy diagnosed with PTSD & exhibiting extreme psychosis & violent tendencies stand in comparison to that crap? He killed a patriot, an icon of US militarism, a whack job, a remorseless psychotic killer.

This is not a claim that Routh is some prize package but that he was mentally disturbed as a result of war deployment & should be treated for mental illness, not incarcerated where that illness will only get worse & likely lead to suicide.

In a FB discussion about Israeli veterans of the Palestinian occupation, there were those who got on moral high-horses, damning the now anti-occupation veterans for having committed unforgivable war crimes & deriding their role in exposing Israeli human rights crimes against Palestinians. Israel has a conscription army for all men & women over 18 years old. And as we know from US war resistance among veterans & soldiers, extreme pressures are put on them to conform–or they are prosecuted & vilified. That’s tough stuff for young people to stand up to.

There are those in the US also who want to extract contrition, want to beat the veterans up with moral superiority, want to ban them from human society. The antiwar movement never took that approach because we understand why young people enter the military, what pressures they are subject to within the military, & how terrifying it is to defy the rigid hierarchy of mind-control & unquestioning obedience.

There is a body of literature written by veterans describing the horrors of war. One of the most powerful from the Vietnam War is “Bloods: An Oral History of the Vietnam War by Black Veterans.” One veteran describes how he used Vietnamese peasants for target practice. When he returned to civilian life & realized what he had done, he described his inability to ever again trust himself or his sense of who he was.

There are remarkable, compelling, wrenching testimonies from veterans at Winter Soldier Investigations in 1971 & 2007, events organized by antiwar veterans to expose war crimes & atrocities by the US military in several wars. You can rock that moral high-horse till the cows come home, but only a fool would deride the antiwar impact & moral authority of those who suffer PTSD & despite the depleted psychic energy stand to denounce war & build opposition to it.

This verdict is an outrage & should be denounced. Along with the massive statistics on veteran & soldier suicides, it stands as testimony to the US treatment of working class kids who go to war, come back chewed up & in pieces, & are denied even elementary social, medical, psychiatric services.

(Photo of Eddie Ray Routh at his trial)