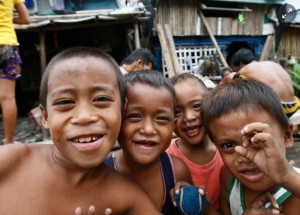 Manila, Philippines isn’t the most populous but it is considered the most densely populated city in the world based on the number of residents per land area. It has an estimated 15 million residents. Four to seven million Manila residents live in filthy, squalid slums often built in disaster zones vulnerable to tropical storms & typhoons.

Some observers look at the squalor & conclude Manila has an overpopulation problem. In their jeremiads they explain that megacities (those with over 10 million people) are springing up all over the globe in “developing countries.” In 1985, there were only nine & today there are at least 26.

Marinated in the ethos of capitalism, they see humanity engaged in a competition for land, food, water, & fuel & they attribute environmental disaster & endemic disease to all those babies.
They’re not particularly insightful observers or they would question: Why did this problem become so massive in the eighties? How did the population of Manila grow from 1.6 million in 1950 to 7 million in 1985 & now to 15 million? Are the Filipinos having that much sex?
Nor does it ever dawn on some of these observers that it is absolutely outrageous for privileged white people to take a tour of slums anywhere & conclude there are just too many black & brown babies.

Of course all that alarmism takes them nowhere. What could they possibly propose to solve the overpopulation of poor people? Do we need another “modest proposal” like that of Jonathan Swift to get rid of too many poor Irish babies by plumping them up as livestock to serve on the tables of English aristos? He meant it sarcastically, of course; they took it for good coin & thought it a worthy proposal.
The growth of cities is a problem. The dispossession of farmers & rural working people & scorched earth policies of neoliberal economics are a bigger problem–at least for the poor. Manila also has one of the highest slum eviction programs in the world because the oligarchs are trying to gentrify the place to put in swanky resorts & mega-malls. The real estate developers are making a killing–at the expense of all those babies.

Of course the Catholic church’s proscription of birth control is a problem among Catholic Filipinos. It’s a problem everywhere. Because, just like the population control freaks, it cuts across women’s right to control their own reproductive lives. But to endorse population control programs rooted in racist eugenics rather than in women’s rights (involving prenatal care, postnatal care, pediatric care, women’s health care, etc.) is putting yourself in the camp of neoliberal racism & misogyny & siding with the filthy rich against the poor.

These little kids are from the Baseco district near the Manila Bay. As charming as the little snot-nosed boy is, he likely has health problems. It’s a particularly squalid slum with high rates of infectious disease like TB & pneumonia, cholera, dengue fever. It’s frequently targeted for evictions & torching & often hit by typhoons. If you look at their lives & cry “overpopulation” rather than demand a program of public housing or an end to dispossession, ‘you might be a redneck’ & not a progressive at all.

The kids are mugging for the camera while demolition crews move in to dismantle their homes.