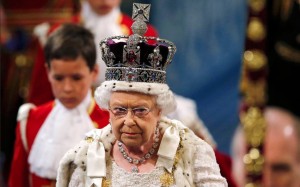 Betty’s gunning for somebody. She’s making her way here through all the toadies & minions that serve the Commonwealth to parrot a speech dictated by the Conservative government. You need a legal eagle to figure out what they proposed–except the part where there’ll be cutbacks for working people.

So if you total up the cost of the 2012 London Olympic games, the spectacle of the Diamond Jubilee with that flotilla up the Thames, & the pomp of this speech alone, it’s quite a bundle. The payroll costs must have been staggering–even though Betty is a notorious cheapskate. Reportedly the people she hires to brush her teeth & wipe her butt earn less than minimum wage. For the speech there were soldiers, yeomen, parliament staff, carriage drivers, a cavalry & horses, train bearers, & all that lost time for the parliament when they could have gone straight to slashing social services.

If Betty merely functions as a ventriloquist dummy for the oligarchy (to which she belongs), if she ostensibly can’t play a political role, what exactly is her function? Royalists believe that blue-blood stuff. Let them have their feudal fantasies. They’re not all there. But what’s with the liberals who say she’s worth her weight in tourist revenue? They could just as well hire re-enactment performers–thereby eliminating the flatulence problems of Phil, the personal scandals of that hapless lot, & they could come up with a Betty-double who would smile once in a while.

It’s so easy to be smug when you’re sitting in a post-feudal society but it’s getting harder all the time. Curtsying, kiss-ass, & other feudal practices have been brought back here big-time–led by our movie stars & politicians. Though for other countries the US regime seems to prefer skipping the regression to feudalism & going straight to slavery.

Speculations for why Betty is scowling here include the ching-ching of lost time she thinks better spent on her dole allowance.