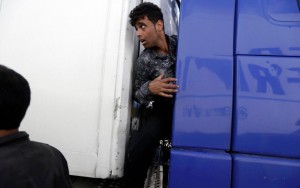 This is an Afghan refugee trying to hide on a truck bound from Greece to Italy. The caption to the photo read that the EU “wants to launch a security operation in the Mediterranean to eliminate the trafficking operations.” They, of course, will not be torpedoing African immigrants in the western part of the Mediterranean while leaving Afghan, Syrian, & others get into Europe through Greece. The crackdown & militarization of this crisis will include the eastern Mediterranean.

Truth of the matter is, there is no resolution to this tsunami of human suffering & dislocation as long as the US & European countries are bombing & occupying several countries, arming tyrannical regimes, imposing draconian economic, social, & political policies that make life unbearable for millions of people. It’s not possible to simply manage this situation which is exactly why the EU is resorting to the insanity of a military operation. It’s why they allowed thousands of immigrants to simply drown without lifting a damn finger.

There are arguments up the wazoo explaining why European countries are unable to handle & integrate the massive numbers of immigrants–beginning with the strain it will put on social services. Well that’s just too damn bad. Because if European regimes hadn’t cooperated in US wars, meddled to undermine the Arab uprisings, & if European corporations weren’t milking African countries dry of their natural resources, there wouldn’t be this massive dislocation.

But let’s get real here. As we know from Betty Windsor’s recent speech to the British parliament & from protests all over Europe now going back nearly a decade, austerity for all working people is the neoliberal gestalt of the day. It’s a replay of that “let ’em eat cake” thing. Only worse. Refugees can’t strain social services that just barely exist.

The problem isn’t refugees. The problem is neoliberalism, the barbaric phase of capitalism, where oligarchs finally have us where they want us–fighting over crumbs, treated like trash, working like slaves.

The great problem for humanity is figuring out the most effective strategies to end this tyranny before this tyranny ends us.
In the meanwhile, immigration is a human right. Open the damn borders.