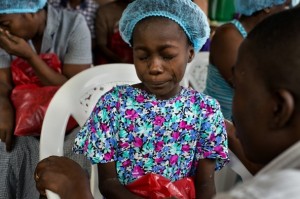 On Monday, UNICEF released a report declaring 2014 a devastating year for children. They said “Never in recent memory have so many children been subjected to such unspeakable brutality.” Children have been “orphaned, kidnapped, tortured, recruited, raped & even sold as slaves.” That judgement would make neoliberal barbarism even worse than feudalism. It might indicate that neoliberalism, the barbaric phase of capitalism, is heading not just for dystopia but for hell on earth.

The report estimates 230 million kids are in war zones including Palestine, Iraq, Afghanistan, Syria, Central African Republic, South Sudan, Nigeria, Pakistan, Somalia, Sudan, Yemen, DR Congo, & Ukraine. The pattern of conflict is so evident one wonders why in the entire report mixing statistics, pieties, banalities, & wishful thinking, that nary a word is spoken about the causes of this “unspeakable brutality.”

Violence doesn’t fall from the sky so who exactly is behind this suffering? Can a single scoundrel or source be identified? Because the Occupy movement had its weaknesses but thousands of activists around the world could point to who they thought was behind all this carnage: the filthy rich “one percent.” Could neoliberalism with its land & resource dispossessions, forced migrations, ethnic hatreds, sweatshops, slums, prisons, & just general plunder have anything to do with it? Could US Pentagon & NATO wars & drone bombings be implicated even a teensy-weensy bit? Could they at least mention Israeli ethnic cleansing in Gaza? Since over 6 million people have died & millions more made refugees in DR Congo in the past 16 years (the deadliest conflict since World War II), could UNICEF consider just a word about multinational mining operations driving the conflict? Perhaps they could even go out on a limb & say something about cops in the US shooting down unarmed Black kids in the streets or railroading them into prisons for spitting on the sidewalk or a little backtalk.

Instead the report speaks of “innovating for equity,” “reimagining the future,” & “scaling up solutions.” UNICEF with the lovely Christmas cards & they can’t even work up a human emotion about the horror of 230 million kids subject to “unspeakable brutality”!? Is a little outrage too much to ask?

This grieving child is 11-year-old Esther Tokpah from Monrovia, Liberia, who lost both parents in the Ebola epidemic in West Africa where nearly 18,000 people contracted Ebola & about 6,500 died. And still no vaccine or healing serum! And only because under neoliberalism, health care is eliminated to facilitate plunder.

We appreciate UNICEF keeping us abreast of the carnage even if they are unwilling to address it with anything other than banalities & abstruse sociology. But if we want to sincerely defend the children of this world from the most unspeakable violence we will have to organize ourselves to act on their behalf. That is the demand of this historic moment. Neoliberal barbarism cannot be allowed to turn our children into not just the chattel but the offal of their plunder.