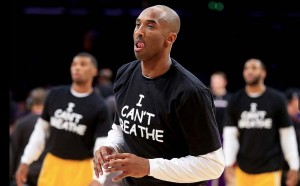 Elite athlete Kobe Bryant & other Los Angeles Lakers wear “I can’t breathe” tee shirts in a pre-game warm up yesterday in LA. Their act of solidarity is a welcome rebuke to nincompoops like Charles Barkley, the retired basketball star whose fame went straight to his head & rotted his brain.

First he mouthed off about “unintelligent” Blacks valuing criminal behavior over academics. Then he called protesters in Ferguson violent “scumbags.” Now he’s defending not just the grand jury decision on Eric Garner but the right of four cops to gang up on Garner while one of them strangled him to death. Barkley told an interviewer, “When the cops are trying to arrest you, if you fight back, things go wrong.” Things go wrong: such a delicate way of describing murder.

Something went really wrong with Barkley too explaining why he has his head stuck up his ass. He’s trying to take up where Bill Cosby left off in defense of white supremacy. What they get out of it is a career way beyond their talents. We can expect to see “Sir Charles” as a TV sports analyst for many years to come. We have only one word of advice to him: beware karma. It can get real nasty.

Hats off to the LA Lakers for this act of solidarity. You can file this image under “This rebellion aint going away soon.”