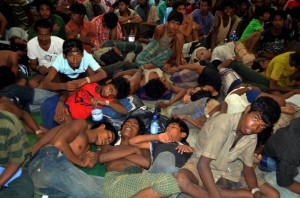 The headlines on this story are that smugglers in Southeast Asia abandoned 6,000 to 8,000 undocumented immigrants from Bangladesh & Rohingya refugees from Myanmar on overcrowded, rickety boats at sea & took off. So many unanswered questions. Like, did the smugglers swim to shore? How did they make their getaway?

As we can see in this photo, the refugees are very young; other photos show many women & children also. Media estimates range from 1,600 to 2,000 were rescued & brought to a “temporary immigration detention center” in Langkawi, Malaysia.

When we investigate & learn the boats were abandoned off the coast of Thailand all sorts of red alerts go off since there have long been reports of the Thai navy towing immigrant boats out to sea & leaving them.

According to the UN agency for immigration (IOM), smugglers are now reluctant to unload the boats in Thailand because in May 2014 the new military junta launched a crackdown on immigrants. They began by going after the estimated 150,000 Cambodians working in Thailand, more than half of them without papers. The IOM claimed 70,000 Cambodians fled across the Thai border but a Cambodian human rights group accused the Thai military of forcibly expelling them & deporting them in crowded trucks like livestock. Thousands of Pakistani immigrants were also arrested & deported.

According to an IOM official, the police crackdown on the Bangladeshi & Rohingya immigrants is because last week “dozens of human remains were found in abandoned camps” in the south of Thailand. Does that explanation make sense to anybody? Were they refugee camps? Are authorities accusing immigrants of mass murder & is the UN buying that? Because the greater likelihood is that Thai police or military were the killers as part of the crackdown on immigrants.

The UN & other human rights groups attribute the crackdown to the government of Thailand not ratifying the 1951 Refugee Convention & lacking laws concerning due process & refugee rights. The European Union & US are party to all those documents & that hasn’t stopped them from letting thousands drown in the Mediterranean or building a 50-foot wall on the southern US border.