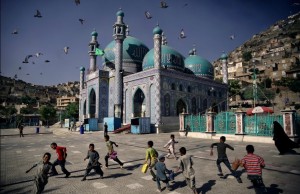 Emancipation US-style: photojournalist Souvid Datta did an album of photos called “Contemporary Afghanistan.” Taken in Kabul, many appear to show affluent Afghans at play (like the man bowling at $35 a lane & kids playing on their X-box). But it also has photos of amputees from land mines learning to walk on their prosthetics at the Red Cross rehab center & these street children playing outside the Karte Sakhi mosque. Many of these kids survive by cleaning gravestones & shrines in the nearby cemetery.

Asciana, an orphanage that partners with the UN, reports the number of street children in Kabul nearly doubled between 2008 & 2014–from 37,000 to 70,000. You just can’t keep up with all the glories of US-NATO emancipation!

Do a people that built this & other magnificent mosques & buildings going back centuries appear to need emancipation by drone? Do 70,000 homeless children testify to emancipation?

US-NATO out of Afghanistan! US out of Iraq! No more phony withdrawals! Grab a placard, find a march & join it.

(Photo by Souvid Datta from August 2014)