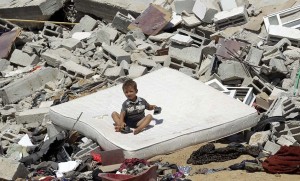 Do you think we’ll find the entrance to those cement “attack tunnels” from Gaza to Israel when this rubble gets removed? Or do you think it more likely Israel will prevent back hoes & bulldozers from removing the cement so their war propaganda won’t be exposed as lies? So we won’t know that ethnic cleansing was the purpose for bombing homes, schools, mosques, hospitals, refugee centers?

Many have noted a major shift in media coverage of Israel & Palestine, including The London Times refusing to publish the scurrilous ad by Eely-Oily Weasel (known better by his stage name Elie Wiesel) accusing Palestinians of using their children as human shields. This shift is not because Israel went too far this time; their genocide & dispossession of Palestinians has gone on relentlessly for over 66 years. These media outlets are not the least bit squeamish about genocide & have been covering Israel’s ass for all of that time. What’s changed is that the BDS boycott movement politically educated hundreds of thousands of people around the world to the historic crimes committed against the people of Palestine. When Israel entered this phase of Operation Ethnic Cleansing people knew exactly what it was all about. BDS combined with Twitter & social media stripped the veil of obscurantism, mysticism, & Exodus mythology to the bare bones & exposed it as colonial fraud.

Israel is a lynch pin of neocolonial policy & plunder in the Middle East & it won’t be let go without a fight–including on the propaganda front. Those smarmy think tanks are working overtime these days to devise a new approach to selling Israeli mythology destroyed by ethnic cleansing witnessed by the entire world.

Palestinian solidarity can’t buy any of it. We stand steadfast against genocide & on the side of justice. We don’t want to hear equivocations; we don’t want phony UN investigations that let Israel walk away scot-free from war crimes. We demand in every possible venue that Israel lift the blockade of Gaza.

That’s our job. And don’t think for one moment that over a million people in the street over the last month demanding “Stop the slaughter in Gaza” was all for naught. It changed everything. Palestinian justice stands a chance now. They no longer stand alone against the mightiest & most barbaric military forces in the world: Israel & the US Pentagon.

This litle guy is in the Gaza town of Khan Yunis, which was pummeled by Israeli bombers.