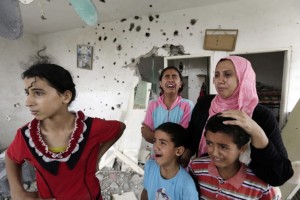 Where do Palestinians in Gaza go from here? They’re returning home to bombed out rubble with only the clothes on their back. They’ve no place to toilet or bathe or sleep. Some may have beloved still buried in the rubble. Before they bring in back hoes & bulldozers to remove rubble, they need rescue teams to recover bodies & make sure no one is buried alive. They need port-a-potties & temporary housing. They need toiletries, clean clothing, diapers, medicines.

Israel’s blown out the ony power plant & destroyed the sanitation systems so on an emergency basis those need to be repaired lest diseases run rampant over an already malnourished population.

But let’s get real. Israel’s embargo of Gaza has the area hermetically sealed tighter than a drum; nothing goes in or out without Israel’s approval. The smuggling tunnels used by Palestinians to bring in vital products embargoed by Israel are destroyed. If Israel bombed out the hospitals & refugee centers in Gaza does anyone seriously believe they’ll open the gates now for back hoes & bulldozers? For rebuilding materials like steel & cement? Or let Gazans rebuild the power plant to restore electricity?

The bombing hasn’t stopped yet; it never really has, but continuous sorties are punctuated periodically with massive assaults like Operation Protective Edge as part of Operation Ethnic Cleansing. Israel forcibly removed Zionist settlers from Gaza in 2005 claiming it was a peace initiative but we now know it was to facilitate ethnic cleansing & make the operation a case of shooting fish in a barrel.

The most important task of Palestinian solidarity is to demand in every venue & every forum that Israel end the blockade of Gaza. That mission has to be the centerpiece of all our work from now on out. It isn’t just a matter of donating humanitarian aid to Gaza since Israel will obstruct the delivery–& obstruct it violently as they did in 2010. In that year, the Gaza Freedom Flotilla, six civilian ships with solidarity activists from around the world, attempted to defy Israel’s blockade of Gaza & deliver humanitarian aid by ship. Israeli commandos from speedboats & helicopters boarded the ships, assaulted activists, & shot to death ten unarmed activists. A UN investigation under the gutless Ban Ki-moon faulted the solidarity activists & let Israel walk away scot-free from ten murders. The UN investigation also concluded Israel’s naval blockade of Gaza was legal.

International agencies will be coming out of the woodwork asking for dough to help Gaza. The Red Cross is already out with a “Gaza & Israel Appeal”, as if Israel & the bantustate of Gaza suffered equal damage. One can argue this is diplomacy but it’s more honest to call it opportunism. The Red Cross raked in millions for Haiti relief after the 2010 earthquake but still hasn’t made an accounting of dispersal & shows no evidence for having done so. An elementary need in Gaza would be port-a-potties & while the Red Cross took in millions, most Haitians were not provided toilets for many months; some never got them. The rubble remained in the streets & is probably still sitting there; displaced Haitians are still living in makeshift squalor.

Be extremely selective in who you give funds to for humanitarian aid to Gaza especially because it will require a massive international political campaign to make sure it can be delivered. Obsequious appeals from beneficent looking blokes like Paul Farmer in Haiti don’t cut it. Beware the halos on those making appeals.

The most important humanitarian aid we can deliver to Gaza is to continue massive public protests, pickets, forums, speak-outs, teach-ins, demanding “stop the massacre in Gaza” & “end the blockade of Gaza!”

This is Salwa Shabat & four of her children returning to their bombed out home in Beit Hanoun, in north Gaza–once again, a few miles from the hills of Sderot where their suffering was so much fun to watch.