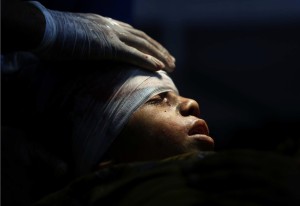 We should take a moment to pay respects to the children of Gaza slaughtered so barbarically by Israeli bombs & tanks: children playing, sleeping, cowering in terror. Israel murdered children hoping to demoralize & destroy Palestinian intifada. What Israel did is enrage men & women of good will around the world, even those who do not understand the conflict between Israel & Palestinians. Palestinian intifada–which is political resistance to Israeli apartheid & ethnic cleansing–has not been weakened by the murder of children but broadened & strengthened in commitment & resolve. How dare Israel murder them & try to blame their parents by accusing them of using their beloved as human shields!?

For every child destroyed so mercilessly, thousands take their place to honor them by carrying solidarity with intifada to the four corners of the earth. Long live Palestinian intifada! Palestine will be free!

This is 12-year-old Abrahim al-Dawawsa, killed in an Israeli air strike, being prepared for burial at Shifa hospital in Gaza City. May these young martyrs RIP.