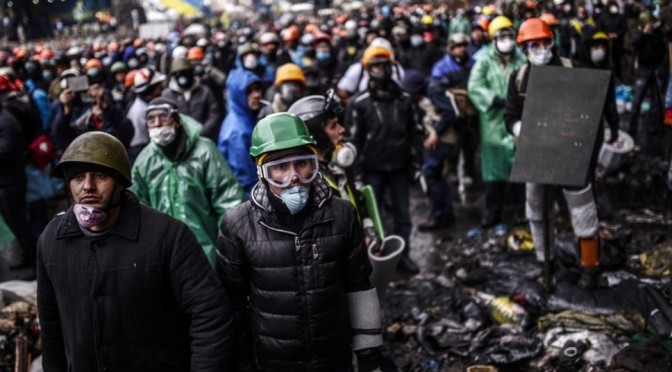 It is a daunting, near futile, task to get an understanding of the Ukrainian protests from media accounts–& not just mainstream, but liberal & radical media. You’re more likely to find that needle in a haystack.

There are several conflicting narratives–depending on your politics. The narrative in the Russian media is echoed by liberal & many radical commentators: fascists have taken over the streets of Ukraine & threaten an escalation to civil war. The capitalist media manages to denounce government repression of protestors without providing a clue as to why they are out in the streets–&, of course, echo the US & European regimes.

Sorting through the cacophony is no easy matter but these protests are of such consequence that all explanations must be scrutinized with a fine tooth comb. Schemas & doctrinaire glibness pawned off as analysis should not be accepted; you cannot just hurl epithets (like “fascist”) & call it analysis.

One cannot understand the conflict in Ukraine without reference to the collapse of the Soviet Union & the reentry of its component countries into the capitalist world economy. The character of the Soviet Union was such a divisive question within the socialist movement that when it collapsed many hoped old animosities could now be abandoned & a phony harmony established. But nobody can walk away from that carnage scot-free without an explanation for what happened. Why did the USSR, which seemed so impregnable, collapse like a deck of cards? If we don’t understand what happened, if no accounting is made, socialist theoretics become completely irrelevant to making this world suitable for human beings to live in.

The former countries within the USSR reentered the international capitalist system after the phase of neoliberal barbarism had already begun. In a process unlike the transition from feudalism to capitalism, a capitalist class & economy had to be constructed in each country from the debris of a state-managed economy run into the ground by tyranny. In the era of neoliberalism, that meant using gangsters & their methods for the massive theft & privatization of public assets. Capitalism now more resembled a mafia-like criminal enterprise–which did not go unobserved in those countries but could be analyzed every step of the way.

The Orange Revolution (2004-2005) & protests today in Ukraine reflect conflicts in the formation & stabilization of an oligarchy where the nation-state has become primarily a vehicle to amass private wealth. That’s the nature of neoliberalism: monopoly capitalism is at odds with the nation-state, defying sovereignty in the pursuit of plunder & cheap labor, & going global in the interests of private acquisition.

Many commentators on events in Ukraine refer to a new Cold War, as if Russia remains a socialist country being menaced by capitalists in league with home-grown fascists. Doctrinaire schemas & the cement heads that promote them as explanations cannot be reasoned with. In the Russian regime there isn’t a shred of socialism remaining. Putin is a former secret service agent, a spy, & just the kind of guy the new oligarchy needs to operate its criminal enterprise. If you think you’re defending socialism by defending Putin you may be more comfortable in the Democratic Party (where you can think anything & get away with it) or in the Libertarian Party (where you can talk rubbish & be taken as an oracle).

Certainly one of the reasons the USSR collapsed was its complete lack of democracy. But while Russia & most former soviet states have adopted capitalism, they have not abandoned tyranny because in the barbaric phase of capitalism democracy might put restraints on plunder. So the old tyrannies were maintained & undercover police agents like Putin came to the fore in politics. It is no accident that under neoliberalism the gulag remains in place & riot cops are an essential feature of rule.

The narrative of Russian, Ukrainian, liberal, & much radical media is simple–& even more so, simple-minded: fascist thugs have taken control of the streets across Ukraine demanding economic & political alliance with the European Union. The thrust & composition of these protests is completely reactionary & must be opposed.

There is no question the extreme right-wing & fascists played a key role in initiating these protests starting in November 2013 to protest Ukraine president Viktor Yanukovych’s rejection of an economic deal with the European Union (EU) in favor of a trade deal with Russia & its economic partners. But when the regime (Yanukovych is a central figure in the Ukraine oligarchy) violently attacked the protestors thousands of Ukrainians entered the fray in opposition to attacks on democratic rights & in opposition to the austerity imposed by IMF & regime policies. What is the relative balance of forces now in the protests between the right-wing & democracy activists? With the information we have now, that is not possible to calculate. And we don’t have to in order to understand what to do.

It isn’t often in history–in fact, never–that fascists align with progressive regimes. It is just as infrequent they attack reactionary regimes. In fact, they align with reactionary regimes. So it’s a mighty curious phenomenon in Ukraine that fascists are confronting the Yanukovych regime over joining the EU trade bloc. The EU agreement is designed to bring austerity to Ukraine just as it has to Greece, Spain, Portugal, Italy, & elsewhere. These fascists aren’t dummies; they represent a section of the Ukraine oligarchy that sees its fortunes in alignment with Europe & NATO. And they are counterposed to those oligarchs who see their fortunes more aligned with Russian capitalism. This is no tug-of-war between socialism & capitalism but between competing spheres of plunder–because plunder was the nature of capitalism even before it entered its barbaric phase.

Ukrainian oligarchs are having differences over which trade bloc will give them the most bang & buck for the betrayal of Ukrainian working people. Joining the Russian trade bloc isn’t the equivalent of forming a socialist enterprise; the Russian trade bloc is a capitalist project for accruing private wealth to a handful of oligarchs in both Russia & Ukraine. From the point of view of Ukrainian workers, who gives a rat’s ass which enterprise you belong to because both will bleed you dry? Those who think Russian capitalism will find a kinder, gentler way of economic evisceration need to study the holodomor in Ukraine history. Or they could just look at the conditions for Russian workers today.

Our demands must be to end the violence against protestors; & we don’t give a rat’s ass that some of those protestors are fascists because defending the right of protest is defending the possibilities for political action in Ukraine & backing the oligarchic regime in its violence only facilitates the development of fascism. If our demand appears to be in synch with the US regime, that is only in appearance. The US regime is a rattlesnake; we do not accept them as allies any more than we look to the Ukrainian regime as allies against fascism. We do not look to the US-NATO to resolve the crisis in Ukraine. We demand US-NATO hands off Ukraine!

The situation is comparable to Egypt when the military junta took after the Muslim Brotherhood with extreme violent repression. We don’t have to have an ounce of affinity with the religious or political views of the MB to defend them against violent assaults. We don’t look to reactionary regimes to settle our differences with bloodshed.

Stephen F. Cohen, a long-time US liberal commentator on the USSR, is making media rounds denouncing the “western” media vilification of Putin as a thug. He claims the Ukraine streets are controlled by right-wing extremists “trying to kill cops.” This liberal historian of the Russian Revolution says a “coup d’etat from the streets” is not democratic & denounces the US for defending protestors against the police violence. Well we have news for comrade Cohen: Putin is a thug & “coup d’etats from the street” are more often referred to as uprisings or revolutions. As for “trying to kill cops?” Is that what he calls self-defense when they’re coming at you & sniping at you from rooftops with live ammunition?

The politics of the thousands protesting have not been parsed accurately but we can be certain that thousands of protestors are there to defend their right to protest without being assaulted with an arsenal of deadly weapons. This is not a question of idealizing masses of working people or of minimizing the influence of extreme right-wing political forces. People (scholars) who have never participated in social movements often view them as ideologically homogeneous when that has never been the case in a single social movement in human history.

Today the term fascist is used broadly to describe anyone with right-wing views. When the term is so recklessly thrown around, it becomes useless politically. But understanding scientifically what a fascist is (how they think, how they operate, who they align with) is of the greatest consequence as neoliberal capitalism resorts more & more to fascism, which is the last refuge of tyranny.

In Ukraine, working people are caught between oligarchs & fascists & until Ukrainians sort that matter out, our political response can only be “US-NATO, hands off Ukraine!” Because they operate secretly, we have no hard evidence yet of the machinations of German, EU & US machinations & intrigues in Ukraine–but we know they’re there because the nature of capitalism is ruthless competition & thus the question of which capitalist trade bloc Ukraine joins is a matter of great importance.

Once again, our political response must be “US-NATO hands off Ukraine!”

(Photo of Ukrainian protestors from BBC)