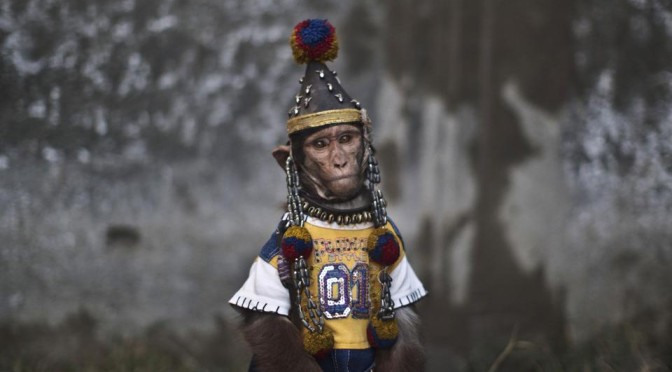 Muhammed Muheisen, the photojournalist who does such powerful photos especially of Afghan refugee children in Pakistan, has done a poignant series on performing monkeys in Pakistan. The monkeys are captured as babies & trained (often using violence) to dance, salute, shake hands, & perform other tricks. This is not a criticism of Pakistanis or even the impoverished owners who reportedly only make about about 500 rupees (US $5.00) a day for the work. You can see the same kind of abuse in any US city with a zoo or where the circus is playing & they have elephants pirouetting on one foot.

This kind of crap is a vestige of such Platonic notions as the Great Chain of Being where life & matter are ranked in a hierarchy from God & angelic beings to royalty, lower to plebeians, then animals, & down to rocks. You can see how comfortably class stratification, white & male supremacy, abuse of animals fit in to such a repugnant schema–& how animals become objects only for labor & amusement.

Those who defend performing monkeys by claiming owners have a strong bond with the monkeys & love them as their own children have to explain why that loving relationship has to be maintained by a rope around the neck so the monkey won’t run off. Such barbaric practices will not stop from outpourings of moral outrage but from eliminating inequity & poverty because on the other end of that rope is the owner’s neck, trapped in social inequality. If the owner has to choose between respect for animals & feeding a family, the unhappy animals draw the short stick.

Just another compelling reason to change the world.