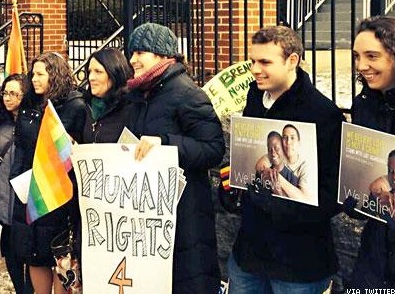 Museveni’s decision to support the anti-homosexuality bill legitimizing pogroms against LGBTI people in Uganda was a foregone conclusion. He’s been playing cutesy for the media & human rights groups by feigning misgivings about the bill & saying he wanted to base his policy on science. So while he refuses to meet with LGBTI activists, he assembled a dozen scientists from Uganda’s Health Ministry to determine if homosexuality is genetic or a social behavior–as if the latter made it criminal. Since you can always find scientists to sing for their supper–especially if you put a gun to their heads (because only a fool or a martyr in Uganda would defend homosexuality when the regime is conducting pogroms), Museveni had no problem getting the scientific judgement he wanted.

Obama was golfing in Southern California when he heard the news of Museveni’s decision. He stopped putting long enough to issue a denunciation saying the bill “will be more than an affront & a danger to the gay community in Uganda. It will be a step backward for all Ugandans & reflect poorly on Uganda’s commitment to protecting the human rights of its people.” Boy, you can’t get more excoriating than that! Is that the best Obama can do when a genocide is in the offing!?

US national security adviser, Susan Rice, was just as indignant & tweeted her reproach to Museveni, which dittoed Obama in sentiment & insipidity. There’s nothing like a good tweet to bring genocide to its knees.

An unidentified “senior Obama administration official” said if the bill is enacted, the US will review US relations with Uganda since, at $400 million a year, the US is one of the largest donors of “foreign aid” to Uganda. The US has a military buildup in the area & is targeting that entire region of Africa for neocolonial plunder so Museveni can rest assured US protests over genocide against LGBTI people will never rise above the level of an angry tweet urging Ugandans to love one another–in the right way of course.

What is needed is ongoing actions & rallies around the world (like were held yesterday) at Ugandan & US missions demanding the Kill the Gays bill be trashed, that the rights of LGBTI people be respected, that the pogroms against them end, & that the US stop its collusion with the Museveni regime.

(Photo from Advocate of solidarity rally opposing Kill the Gays bill; photographer & location unidentified but rallies were held around the world.)