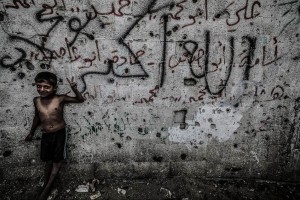 Gaza is out of the headlines but it is by no means getting a diplomatic bum’s rush. Machiavellian scheming abounds involving the UN, Israel, US, UK (in the person of Tony Blair), Norway, Egypt, & the Palestinian Authority (PA). No one has played a more perfidious role in all that than Mahmoud Abbas, the head of the PA, which serves as an Israeli proxy to police the West Bank. He’s at the UN General Assembly today talking a blue streak about Israeli genocide but his role throughout the latest phase of Operation Ethnic Cleansing was nothing short of traitorous. Abbas isn’t the elected head of the PA since his term expired nearly six years ago but he is such an effective double-dealer that Israel & other governments continue to treat him as head of the West Bank bantustate.

Prior to Israel’s murderous siege of Gaza this summer, the PA & Hamas (the elected leadership in Gaza) forged a unity agreement for a consensus government of Palestinians. Israeli apartheid needed to destroy that frail collaboration because it needs to posit Hamas as terrorist (in contrast to the PA’s sniveling collusion) to justify ethnic cleansing of Palestinians by carpet bombing. Despite the unity agreement, the despicable Abbas turned on Hamas during the siege, not because he is a fool but because he is a traitor to Palestinian justice.

His incendiary speech at the UN today is just part of his role as Israel’s proxy; he doesn’t mean a word of it. It’s just part of the theater required to betray Palestinians more effectively. But he isn’t just Israel’s proxy; he represents neoliberal economic & political interests in the Middle East & he hopes to be rewarded handsomely for his treacheries in peace prizes & honoraria. His ethnicity as a Palestinian means nothing to him because his class interests are much more highly rewarded & not just with prestige but big bucks.

Robert Serry is the long-time Dutch, European Union, & UN diplomat who brokers the Israel & Palestine conflict for the UN. He’s a hustler, practiced in lying & bullying, with a few decades experience maneuvering against Palestinians. He’s been the UN’s point man for Israel since late 2007 & just brokered an agreement between the UN, Israel, & the PA for reconstruction in Gaza.

Gaza is now mountains of cement rubble & can’t even begin to consider reconstruction until that rubble is removed. Meanwhile, estimates of those made homeless by the bombing range from 150,000 to 350,000. People are living in makeshift tents midst the rubble, in a few former schools used as UN-refugee centers, & in a measly 100 trailers provided by a relief agency. Ending the Israeli embargo prohibiting building materials from Gaza is essential to removing massive tonnage of cement & reconstructing thousands of schools, homes, hospitals, clinics.

The scheme our UN hustler is brokering includes Egypt (with a history of treachery toward Palestinians) & Norway (collusive with Zionist Israel since 1949) co-hosting a “donor conference” in Cairo on October 12th to raise money for private companies to rebuild Gaza. These donor conferences are an old scam. Usually about 70 countries show up, blither at each other, & pledge billions in reconstruction aid–most of which will not be dispersed. That which is dispersed is to corrupt government officials to steal or as bribery. Afghanistan & Haiti reconstruction aid are most recent examples of this travesty. And now Gaza–which is likely to see very little of that dough in housing & schools because reconstruction of Gaza is not what Israel & the neoliberal project have in mind to expand & cement their control of the Middle East. As we know from reconstruction in Iraq & the notorious operations of private firms like Halliburton, most of the dough will be stolen.

The heart of the reconstruction project is that it was brokered with & will be administered by Abbas & the PA, who are not democratically elected to run Gaza, & completely ignores & preempts Hamas officials, the elected leadership in Gaza. It’s a slick maneuver to decisively put the PA at odds with Hamas & break any possible future unity in action to defend Palestinian self-determination.

When billions of dollars are involved & there are corrupt officials like Abbas administering for Israel & denying Hamas any say, the possibilities for conflict, not to mention grand larceny, are rampant. The present political leadership of Palestinians will be engaged in internecine conflict that can only weaken the Palestinian struggle. And that is the grand hustle in the proposed reconstruction program.

The people of Gaza chose Hamas as their leaders like it or not, whether the politics of Hamas are adequate to their historic mission of Palestinian self-determination, or not. Israel, the UN, US, & the whole gang of neoliberal predators should have no say whatsoever & should not be allowed to get away with this treacherous scam without Palestinians & their supporters yelling bloody murder.

It’s hard to keep up with the scheming against Palestinian justice & it is for them to solve their leadership problems. Our course remains steadfast: building the solidarity movement by evangelizing for the cultural & economic boycott of Israel & demanding “No military aid to Israel!” “End the embargo of Gaza!”

(Photo of boy in Gaza against bullet-marked building from FB wall of Muhammed M. Kabariti)