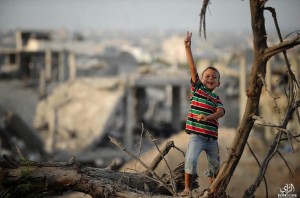 Robert Croma, a photojournalist who worked in Gaza & the West Bank after the Intifada in 1988 said wherever he went children spontaneously flashed the “V” sign when they saw his camera & he has dozens of photos showing that.

This little guy in Gaza was photographed after the cessation of Israeli bombing on August 26th. The spirit of intifada & resistance to Israeli apartheid is clearly still alive but so is massive psychological trauma for children who sustained seven weeks of terror. Many are now orphaned, injured, homeless, hungry.

As admirable as the defiance is, this is no way for children to come of age, no way for them to live. That adage “What doesn’t kill you only makes you stronger” doesn’t really fly when we’re talking about apartheid & ethnic cleansing.

The cultural & economic boycott (BDS) of Israeli products is the strongest way to stand with this little guy. He has a right to peace & a right to justice. But isn’t he something else!?