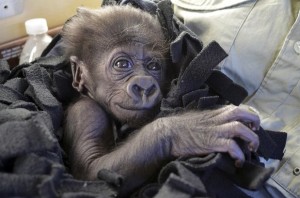 If eyes are the window to the soul, this is the soul of bereavement & a condemnation of the zoo system throughout the world that takes complex living creatures out of their milieu & parks them in stinking cages until death. The smell of the kennel & the smell of the zoo are the stench of exploiting animals as spectator sport with no respect at all for their well-being.

This is 6-week-old Kamina, a Western Lowland gorilla originating in the forests & swamps of central African countries. Her mother, held captive at the Oklahoma City Zoo, shunned her at birth. Such antisocial behaviors are common in animals disoriented & made crazy by captivity. Zoo keepers (who must surely be among the most obtuse &/or cruel animal observers on the planet) moved the bereft Kamina to the Cincinnati Zoo to be adopted & reared by another adult female. We laud this unusual display of compassion but assume it was more a way of protecting the “merchandise.”

We hope the little gorilla girl finds maternal love in Cincinnati captivity & we work for the day when all zoos will be dismantled & animals rescued to live a suitable life.