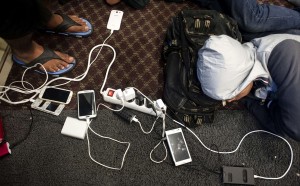 Turns out the revolution will be televised. Every time refugees get near electrical outlets we see scenes like this. This is on a ferry heading for the port of Piraeus on the Greek mainland but we’ve also seen them in train stations along the way north. Who could have predicted the cell phone would be such an invaluable tool for refugees & immigrants to let their families know where they are & if they are safe.

Selfies are the only thing missing.