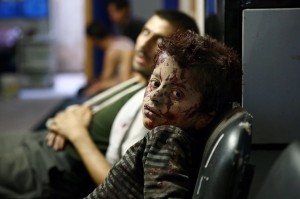 It’s hard to think of an Arab uprising where the analysis has been more mangled & bungled than the Syrian uprising. A large section of the left hails Assad as a champion of democracy & others recognize him as a dictator. Of course those who hail him as a champion can’t explain why he’s been bombing his own people for the past four years, killing an estimated 250,000 people, jailing thousands of dissidents, & driving 10 million into exile.

Some claim the Syrian uprising in 2011 was right-wing elements against a progressive regime. That has become the regrettable narrative of many leftists every time one of their favorite capitalist regimes faces popular opposition. They’ve regressed in analysis of capitalism in crisis to the jejune history of good guys/bad guys taught in US elementary schools.

Things are gonna get bumpy for Assad supporters now that the US has admitted its strategy in Syria of arming anti-Assad paramilitary militias was a mistake. Instead, it’s going to align with Russia, Israel, Australia, Turkey, & the Assad regime to fight ISIS. It would be best if Assad supporters reevaluated their analytical methods but it’s more likely most will engage in some fast talking around their misjudgments & run around like chickens with their heads cut off. What’s important is not who’s right & who’s wrong but what is actually happening in Syria & coming to grips with the complexity of that because it’s shaping up to be a very dangerous military situation for the peoples of the region.

What’s important to watch is the transition we’re going to see in US war propaganda. The US quite correctly–but for its own reasons–assessed the brutality of Assad’s regime. Now they have to pull a switcheroo to ally with his regime & promote that in a convincing way to the American people. There’ll be plenty of fast talking coming out of Obama & the Pentagon too.

In truth, we have to take all our intelligence about what ISIS is, what it’s doing, & what kind of threat it is from media accounts based on Pentagon & Kremlin press releases. That’s as reliable as a Chinese fortune cookie. This is why the voices of reliable Syrian activists are so important.

But we needn’t be scholars on Syria; we needn’t agree on the political character of Assad or of ISIS. We only need organize ourselves to re-build the international antiwar movement to oppose any military intervention into Syria by any country & at the same time demand Assad stop bombing his own people.

This small boy is awaiting treatment for shrapnel injuries in a makeshift hospital in Douma, an area near Damascus which Assad warplanes have been bombing for several months because it’s a stronghold of US-backed militias. We’ve seen months of pictures exactly like this. This is why 10 million have chosen to flee.

No war in Syria! Stop the bombing!