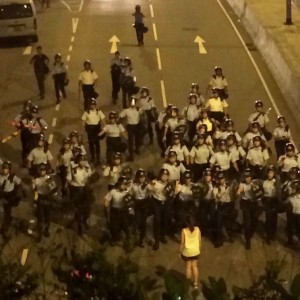 Yesterday was the one-year commemoration of the democracy movement in Hong Kong, China, called the “umbrella movement.” This is a re-post from October 2014 as a tribute to that continuing movement but also because it was accused of being a US-orchestrated spectacle & this is to answer that scurrilous charge.

It is now frequent for commentators to smear opposition to tyranny by labeling it US-orchestrated or right-wing. They did this to the Arab uprisings, including in Syria; protests against the Rousseff regime in Brazil & protests in other Latin American countries; & against China in Hong Kong. This post addresses those smears because if they are not exposed politically, people around the world who want to render active solidarity will be confused & demobilized.

Many articles insist the Hong Kong democracy movement is orchestrated by the US State Department, because the National Endowment for Democracy (NED)–which is a US government agency likely chock full of CIA operatives–fed money to some organizations & activists. Those who make these allegations have read too many John LeCarre novels or listened too much to Alex Jones–& have participated in politics too little. Of course the US government is involved; they have vested interests in the outcome. But suggesting these protests are CIA street theater rather than a profound social movement for democracy is politically shabby & plays into the hands of reaction.

For our part, we salute the protesters in Hong Kong & extend our fullest solidarity.

Photo is an activist without umbrella or other defenses standing alone against the socialist-capitalist riot cops in a scene reminiscent of Tank Man in Tiananmen Square.

(Photographer unknown; from the FB wall of Gregor Benton)