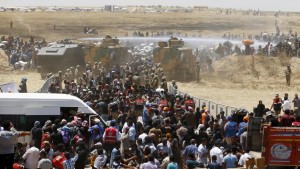 It’s really hard to put a good spin on this picture but that didn’t stop Turkish media from trying. The Turkish military is using water cannons to stop Syrian refugees, many of them children, elderly, & infirm, trying to cross the barbed wire border yesterday near Akcakale. They are fleeing intensifying warfare between ISIL, Kurds, the Assad regime, & US bombing. Turkish media said the water cannons were used for “congestion in the flow of people.” So why didn’t they just send some traffic cops? If they remove the barbed wire there won’t be any congestion.

Water cannons are extremely dangerous assault weapons which cause any number of injuries including to internal organs, bones, eyes, skin. That’s why they’re used & not for crowd management purposes.

There are presently an estimated 3,000 to 6,000 Syrian refugees surging at the Turkish border; since the civil war began, an estimated 2.5 million have entered Turkey.

By every definition in international law, these are war refugees & whether they like it or not, countries are obligated to open the borders to provide sanctuary–& that doesn’t just mean a sidewalk to lay your head on. It means shelter, food, water, clothing.