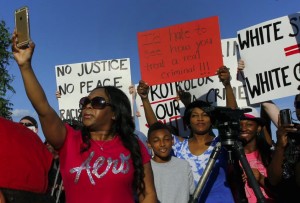 The more we learn about the incident last Friday in McKinney, Texas, the uglier & more disturbing it becomes. It isn’t just a case of police brutality against a young Black woman–although that is disturbing enough. The cop not only used excessive force & pinned 19-year-old Tatiana Rose to the ground face down for “running her mouth”, but he pulled a gun on other unarmed teens who were present. Apologists on the news said the cop “allowed his emotions to get the best of him.” Police who get overcome so easily with “emotion” (a euphemism in this instance for racism) when confronted with upset teens should really not be carrying weapons. Although the rednecks can be pretty damn scary since they’re usually packing.

McKinney, Texas, a suburb about 30 miles north of Dallas, is 75 percent white. Because segregation in housing remains the norm in US cities, public pools are more often in white neighborhoods. If Black kids want to swim or cool off in a pool, they have to enter mostly white areas. In this instance, Rose was hosting a pool party near her family home in a gated, affluent community & invited her Black friends from outside the neighborhood to use the private pool.

This antagonized the local rednecks who converged to taunt the Black teens with the standard racist fare of “go back to where you came from,” “go back to section 8 housing,” & with all sorts of cursing & other verbal & racist abuse. Young Rose comes out the hero in all this when she came to the defense of a 14-year-old friend being ridiculed by a grown white woman. According to her, the white woman then turned on her & slapped her in the face. Nobody should have to ask why we accept the word of Rose over that of the rednecks using racist epithets. It’s all on video.

White rednecks then called the police who sent a squad car with Officer David Casebolt, the McKinney version of Barney Fife with an attitude & an emotion problem. These were kids at a pool party; there was no pretense of drug use to justify his aggression. The police department suspended him but he’s since resigned & gone into hiding claiming he’s receiving death threats. He’s an emotional guy who can’t take much stress. Someone probably said “boo” to him & he got scared. That’s why he pulled a gun on unarmed kids possibly hiding weapons in their swimming trunks & bikinis.

There have been protests of thousands in McKinney by the Black community & its supporters. It’s all part of the emerging civil rights & Black power movement; it all heralds a new day dawning that will end the US war on Black youth.

(Photo of McKinney protest on June 8th by Mike Stone/Reuters)