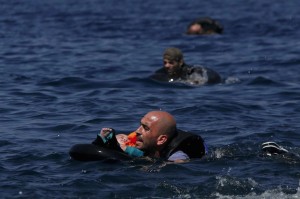 There are many poignant photos from this historic refugee crisis no matter where you look. But this one is simply overwhelming. A Syrian man in carrying his baby in a rubber tube while he swims to shore after their dinghy deflated about 100 meters (329 feet) from the Greek island of Lesbos. One can only imagine the terror he feels.

CBS news crews are reporting that Turkish coast guard boats are attacking the dinghies to disable them. They also reported speed boats coming fromGreek waters where men are pointing guns at refugees & disabling the fuel lines on boats.

We can be overwhelmed with all this or we can take an active stand against it. Overwhelmed will get us nowhere so we have no choice but to demand “Immigration is a human right! Open the borders!”