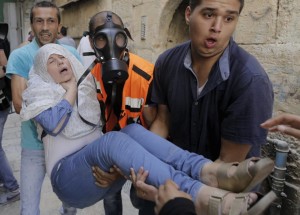 This Palestinian woman is being evacuated by medics after being overcome by tear gas in an ongoing assault by Israeli police on the Al-Aqsa mosque in East Jerusalem. Media describes the military bombardment of the mosque as “clashes between stone-throwing Palestinians & Israeli police.” But of course Israeli police & military have no right to be in the Noble Sanctuary compound where Al-Aqsa is located because East Jerusalem has been illegally occupied by Israel since 1967.

The sole purpose for these conflicts is Israel’s attempts to destroy the mosque under the guise that Solomon’s Temple stood there nearly 2,500 years ago–although repeated excavations haven’t turned up even a shard of evidence. The temple that was there was destroyed by the Romans nearly 2,000 years ago. If that’s a legitimate claim, those whose ancestors fled Ireland in the so-called “potato famine” can start packing their bags for their ancient homeland in the Rhineland.

Statistics show that Israel is one of the most irreligious countries in the world with the number of atheists & agnostics near 50 percent. So this isn’t about recovering religious heritage & media should stop repeating the idiotic mantra that the site is the holiest in Jewish tradition & only the third holiest in Muslim tradition. The siege on Al-Aqsa is only about an invented people called Israelis manufacturing historic & religious traditions to render a sense of entitlement to Palestine.

It’s now clear Israel is targeting the mosque for destruction. They began with excavations underneath in order to weaken the structure so it would collapse. They instituted bans on men under 50-years-old from worshipping in the mosque & made them kneel in the streets outside.They’ve repeatedly allowed Zionist extremists to protest at the compound & have ushered Zionist settlers & tourists into the mosque to tour & worship when it is expressly forbidden by the agreement between Israel & the Jordanian foundation that administers the mosque. They’re escalating the assaults now by blacklisting women from the mosque & most importantly are entering the mosque with tear gas & grenades to do extensive physical damage & make it impossible for Muslim worshippers to simply practice their religion.

Israel is trying to impose a press blackout on their siege of Al-Aqsa (a siege which includes violence against women & other protesters trying to defend the mosque) by arresting & assaulting Palestinian reporters & keeping international media out.

As Israel focuses its violence on Al-Aqsa, we must rally to the defense of religious freedom for Palestinians & put political pressure on Israel to stop the destruction of the mosque.

Building the economic, cultural, & academic boycott (BDS) of Israeli apartheid is absolutely imperative along with demanding the US & other regimes stop bankrolling these monstrous crimes.