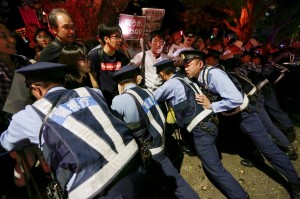 There have been weekly protests in Tokyo of “tens of thousands” of people opposing legislation being railroaded through the Japanese parliament to legalize the re-militarization of Japan & allow the country to deploy troops abroad for the first time since WWII. The proposed law would reverse Article 9 in the constitution outlawing the use of military for war. It’s essentially a “no war” article & isn’t a pacifist commitment but was imposed by the US after Japan’s defeat in WWII.

The reversal of Article 9 has been in the works for a while. Part of the railroading is coming from the US who want to incorporate Japan into an offensive naval & troop force as US competition with China heats up in the South China Sea & as the proposed Trans-Pacific Partnership goes into effect. This is openly acknowledged in media, including by Forbes, a voice of US capitalism.

Japanese working people have nothing to gain & so much to lose by re-militarizing. But the regime is hellbent on it not just because of political pressure from the US but because war is built into the capitalist system as a way to resolve internal crises & conflicts. Fukushima is only one indication that plenty of those exist in Japan.

The most imperative political need is to re-build the international antiwar movement that collaborates to maximize power in opposing militarism from Afghanistan & Iraq to Pakistan, Palestine, Yemen, Kashmir, DR Congo, Somalia, Guatemala, Mexico, & all the rest. Nothing is more urgent.

Antiwar forces are assembling, most notably in defense of Gaza & in the emerging antiwar movement in places like Japan & the Philippines. We need to reach out to work together before the forces of militarism turn this planet into a killing field & create millions more refugees with no place to go. That is not an overstatement but the historic mission of our generation.

Our fullest solidarity with the antiwar movement of Japan who carried placards saying “No war, No nukes,” “Scrap the war legislation.”