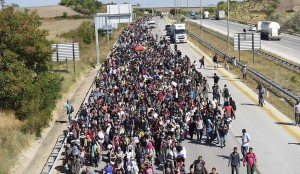 This is Syrian refugees marching along a Turkish highway to the Greek border. Turkish authorities continue to obstruct their movement, holding some back from traveling & in some instances using aggressive border police against them. Turkey is allowing the US to use its airbases to launch air strikes but assaults refugees fleeing from the bombing.

It’s clear to all except the halfwits that run the European Union that the movement of refugees is not going to be held back by razor wire & brutalities at every damn border. You cannot stop hundreds of thousands of people fleeing war & bombing. You can hassle them along the way & make their life a living hell but you won’t stop them.

The EU is holding a summit this Wednesday to figure out how to handle this crisis but no one should hold their breath because the last time this cabal met they instituted a military naval operation against African refugees.

No one denies the logistics of managing this crisis or doing the paperwork/visa thing is daunting. It’s so much easier & expedites movement if you just provide humanitarian assistance–like busses–along the way & help people get to their destination.

Immigration is a human right which unfortunately neoliberalism, the barbaric phase of capitalism, makes necessary. Open the damn borders.