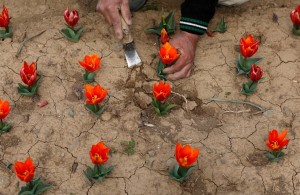 If it weren’t for the relentless efforts of Kashmiri activists on social media, most of us wouldn’t know anything about the Indian occupation of Kashmir because of the decades-long news blackout. (It is also true that social media has been key to education about the Palestinian struggle & to building solidarity.)

The slight, though skewed, increase in reporting about Kashmir is surely because media has to present a propaganda brief to counter information coming from activists. Indian prime minister Modi’s new buddy-buddy relationship with Mark Zuckerberg & periodic shutdowns of the internet in Kashmir are part of attempts to keep the world ignorant about the occupation. India & several other countries have a lot invested in that occupation.

In researching the considerable environmental problems caused by the Indian occupation of Kashmir (renowned for its natural beauty), one finds the occupation frequently called a “civil war” or a conflict “between separatist Muslim militants & Indian forces.” In the modern world, the term “Muslim militants” is intended to evoke images of terrorists, Al-Qaeda, & ISIS & immediately tunes out political curiosity or solidarity. What’s remarkable in even progressive journals is how little interest is expressed in investigating what’s going on.

This is a photo from the Guardian-UK a couple days ago. The caption reads, “Srinagar, India: A gardener works in the tulip garden on the banks of Dal Lake. The tulip season, which usually starts at about 21 March, has already begun.” Such a charming photo; it would be so appreciated in any number of gardening magazines. But when you investigate the wrenching conflict between Kashmiris & the Indian military around Dal Lake & the profligate environmental destruction of its beauty (especially through deforestation) & the forcible relocation of local residents, this charming little tulip bed becomes another place to bury the truth.