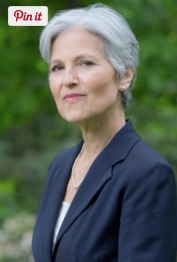 Jill Stein doesn’t have a chance in hell of winning so it will be a protest vote. But those who vote for her should be clear about where she stands on those issues which are touchstones in US politics: war & militarism; US support for Israeli apartheid; civil rights & women’s rights; & immigration/refugee rights.

Her approach to politics differs from mine but generally her views are consistently progressive & liberal. She’s no iconoclastic thinker or pioneer but she’s on the right side. She doesn’t call for open borders or assert immigration is a human right but she is not hostile to undocumented immigrants. She just wants reform & new procedures. That’s generally how she approaches politics. She doesn’t challenge the economic system but wants more democratic procedures to govern. She doesn’t think in terms of systems but in terms of modifications & adjustments to make a system in profound crisis work better.

Where there are serious problems with her program are her views toward Israel & Palestinians. If you consider that a fundamental question in US foreign politics, you will find her equivocations & outright accommodations to Israeli colonialism unacceptable. Even more than that, you will see how limited her understanding of the US relationship to Israel, of the nature of US militarism, of Israel’s function in the Middle East as an armed fortress against democracy.

She is clear about Israel’s occupation, apartheid, illegal settlements, collective punishment of Palestinians. She supports BDS & the right of Palestinian refugees to return. But then she says: “On taking office, I will put all parties on notice – including the Israeli government, the Palestinian Authority, & the Hamas administration in Gaza – that future US support will depend on respect for human rights & compliance with international law. All three administrations will also be held responsible for preventing attacks by non-state actors on civilians or military personnel of any nationality. The parties will be given 60 days to each demonstrate unilateral material progress towards these ends….Should the end of US aid fail to cause a party to redirect its policies & to take steps resulting in sufficient material progress within an additional 60 days, I will direct my State Department to initiate diplomacy intended to isolate & pressure the offending party, including the use of economic sanctions & targeted boycott. In this way, US policy will begin to become consistent with its practices regarding other violators of human rights & international law in the region.”

Didn’t she say a mouthful! After you boil all that verbiage down, what you see is that Stein blames the conflict between Israel & Palestinians on both parties. She replaces Palestinian Intifada in her equation with their problematic current leadership & thereby manages to avoid condemning Israeli colonialism & military aggression. How the hell does that explain what Israel is doing to Gaza!? That’s because, as her campaign platform clearly states, she recognizes the rights of self-determination for both Israel & Palestinians & calls for a bantustate solution, that is, a return to the 1967 borders. Can she even conceive of a democratic, secular state where Jews & Palestinians live as brothers & sisters?

She does not challenge a Jewish-only state nor does she oppose Jewish immigration to Israel but accepts that as “self-determination” when it is nothing but arrant colonialism & theocracy. Zionists don’t get to preempt the achievements of human democratic civilization by claiming a special dispensation at the expense of Palestinians.

Her position isn’t just a massive compromise with Israeli colonialism & ethnic cleansing; it would be unbelievably naive for her to hold these views–unless in fact, it’s a betrayal of Palestinian justice in disguise of “a pox on both your houses’.

It’s a hard lesson to learn in politics, but you can’t have it both ways when it comes to justice. You either stand with Palestinian self-determination or you make a mealy-mouth retreat to compromise.

Some may think mine too hard-assed a view of the Palestinian struggle–whereas I consider Stein’s view a half-assed protestation against apartheid & ethnic cleansing. Tell us where it’s ever worked that way to end tyranny.