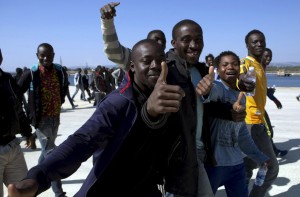 This is a group of rescued immigrants jubilant after being rescued by an Italian coastguard vessel in the Mediterranean. Over 400 men, women, & children disembarked in a Sicilian harbor. Military operations against immigrants are scheduled for launch this month led by the Italian navy & including several other European countries with warships & surveillance helicopters.

These jubilant young men may not yet know they will more than likely be processed, fingerprinted, & deported back to their home countries. Very few will be given residency & work permits in Europe. But at least they got on shore without drowning or before the EU starts torpedoing ships under the guise of taking out traffickers. Immigrants & refugees will not be the “collateral damage” rued by the murderous EU but the intended victims.

When you contrast the resources deployed by the EU to rescue thousands of drowning refugees to the resources used to terrorize & deter them, it says everything you need to know about EU immigration policy: in any sane society it would be called barbarism.
Immigration is a human right! Open the borders!

For the moment, we celebrate with these young refugees & wish them Godspeed on their way.