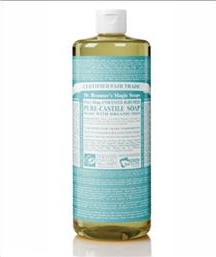 Recently I told a teenage friend I would get him my protocol for acne control. After I was laid off my job of 25 years, I studied Chinese medicine & combined that with a study of physiology for classes I taught on skin care (including sun protection) without chemicals.

The boycott of Israeli products has thrown a monkey-wrench into the protocol. The labels on Dr. Bronner’s products are covered with spiritual slogans about world peace but their political savvy is nothing to sniff at. In 2007, a few years after BDS was launched by Palestinians, the company announced they were sourcing 90% of their olive oil (150 metric tons per year) from Palestinian producers in the West Bank through the trading firm Canaan Fair Trade (CFT) working with the Palestine Fair Trade Association (PFTA)–both organizations founded by an American-Palestinian entrepreneur.

This is where the plot thickens. According to Dr. Bronner’s, the other ten percent of their olive oil comes from Israel, including an unspecified amount through Sindyanna, a fair trade business in Israel run by Jewish & Palestinian women. A closer look at Sindyanna suggests they are not so much New Age or apolitical entrepreneurs as compromised with Israeli apartheid. Another unspecified portion of that ten percent from Israel is from what Dr. Bronner’s calls the “Jewish Israeli Strauss family farm.” Here’s where things get real dicey indeed.

The Strauss firm is hardly a family farm. It’s Israel’s foremost food & beverage company; in 2004 the Israeli Antitrust Authority labeled it a monopoly–an enterprise engaged in all sorts of felonies. The Strauss family has deep connections to the Israeli military (IDF). From 1975 till 2001, the company was run by Michael Strauss, a former elite IDF scout. It’s now run by his daughter, Ofra, who posted not just support for but “adoption” of the Golani & Givati Brigades of the IDF on the Strauss website.

The Golani & Givati Brigades are elite units of the Israeli military in operation since the 1948 war to dispossess Palestinians. Both have been involved repeatedly in Israeli wars against Palestinians, including every murderous siege on Gaza.

Well now, Dr. Bronner’s can’t have it both ways. You can’t be all New Age on your labels & continue doing business with ethnic cleansers in your board room. It isn’t splitting hairs to say Dr. Bronner’s should be boycotted until they get rid of that 10% from Israel & sever business (& probably political) relations with Strauss.That 90%-10% split between sources for olive oil may well not be reliable–any more than their designation of Strauss as a family farm.