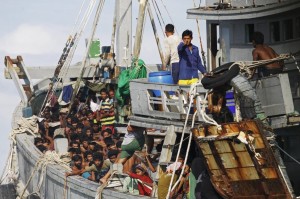 Lest for one moment we think the refugee crisis in the Andaman Sea has resolved, we should remember there are at least four thousand people still adrift in boats without water, food, or medical care. There was some big talk from the presidents of Ecuador & Turkey about sending ships & aid which has not transpired. Military aid they can get anywhere in a flash but humanitarian aid never seems to get beyond big talk.

The Myanmar navy intercepted this drifting boat with 727 refugees fleeing Rakhine State, Myanmar & held it offshore for more than three days. Journalists on small boats attempting to document the event were turned around by armed naval patrol vessels & ordered to delete any footage from their memory cards. They were also ordered to sign documents promising not to attempt to return.

The person on this boat gesturing to journalists is a Myanmar military officer who commandeered the refugee boat. Today it’s being reported that after three days of detention & starving at sea, the refugees are being transported back to Rakhine State–likely so Myanmar can get their persecution out of the public eye.

Politicians like Obama are making wimpy-assed statements of protest to the Myanmar regime. They should be issuing international sanctions & ceasing all business with Myanmar. The regime should be isolated & sealed up tighter than a drum until the Rohingya are granted full citizenship, full rights, & the end of persecution. Of course the criminal US regime is in no position to protest; it’s the braying of a jackass. But we have every obligation to justice to demand our regimes sanction Myanmar & cease all business ventures until violence & persecution of Rohingya have ended.

And one last question: where is the UN–so Johnny-on-the-spot when it comes to sanctions for war purposes? If they were actually what they claim, shouldn’t they be holding emergency sessions of the General Assembly to impose sanctions on Myanmar?

If you live long enough under neoliberalism, the barbaric phase of capitalism, without questioning, you end up thinking & braying like a jackass too. Spare yourself that ignominy & stand with the Rohingya until they have found a safe haven now & justice in Myanmar.