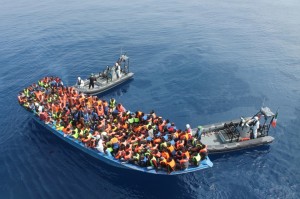 African immigrants continue to depart from Libya for Europe by the thousands–so overwhelming are the forces of survival that compel them. This past weekend, an estimated 6,000 immigrants were rescued by “an array of European military vehicles.” The immigrants in this photo are being rescued by an Irish Navy ship.

European navies are now converging on the Mediterranean in preparation for a military assault on immigrants under the guise of going after “human traffickers” who for the most part are fishermen. These photos are likely a genre of war propaganda to make the navies appear humanitarian rather than barbaric when they start torpedoing immigrant boats. The question is, why weren’t they mobilized in the Andaman Sea doing search & rescue for the thousands of Rohingya still adrift? What other purpose would a European navy serve since none of them are at war?

Right-wing Italian politicians in northern provinces like Lombard, Veneto, Liguria (those regions probably least affected by immigration) are trying to work up a popular drumbeat against accepting immigrants & pledging not to shelter those saved at sea. Those politicians from the Lega Nord (Northern League) are the Italian version of the US Tea Party: xenophobic, racist, nationalist, provincial, with just enough populism to give them “street cred,” & singularly vicious & stupid.

In fact, such massive immigration does strain social services & housing resources in other parts of Italy–especially when it’s under the whip of neoliberal austerity policies for working people. But to be frank, Italy is not expending monies on housing for immigrants: they live either in squalid housing like tents, in the rough, or in filthy, overcrowded prisons (euphemistically called detention centers).

All the more reason to open the borders & allow immigrants free movement to the many other countries where they want to go to work & live. That’s what humane societies would do for people seeking refuge from war, persecution, poverty. Then they can move those navies forthwith to the Andaman Sea to rescue Rohingya fleeing from violent persecution in Myanmar & still adrift in boats without food, water, or medical care.

Immigration is a human right! Open the borders! This immigration crisis & threats of military bombardment are a call to arms. Political groups across Europe should be prioritizing rallies & protests demanding their regimes open the borders & give sanctuary to our brothers & sisters from wherever they are from. They should be incorporating those demands into every action against IMF-EU austerity policies. “An injury to one is an injury to all” remains the iron law of social transformation.