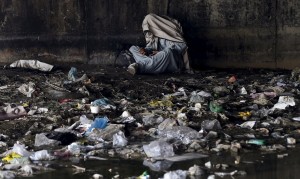 Emancipation US-style: This unfortunate man is a drug addict in Kabul, Afghanistan under a bridge near the stinking Kabul River where hundreds of addicts congregate. This man is a victim of the US-NATO war.

Afghanistan has long been the world’s leading producer of opium & heroin (up to 90%) although drug use & addiction by Afghans was relatively low, despite decades of occupation & war. But after the US occupation in 2001, drug use spread at an alarming speed. According to a UN drug agency report in 2010, addiction grew from 940,000 in 2009 to over 1.6 million out of a population of nearly 33 million people. The UN report estimated there are 3 million more drug users in the countryside. Many of the addicts are small children, as young as four. UN estimates are somewhat at odds with those from the Afghan Health Ministry which in 2014 estimated the number of addicts at over 3 million people or over 11 percent of the population.

Several media reports claim the soaring addiction rates are due to the dislocation of Afghan refugees in Iran & Pakistan–particularly they implicate Iran where heroin is reportedly readily available. The statistics speak for themselves: mass addiction is directly related to war & all of its consequences. Not only are millions dislocated, but they are unemployed, orphaned, have seen loved ones blown up & seen fields, hospitals, schools, mosques, homes demolished by bombs. Afghans, like most people, have limited emotional ways to cope with such barbarisms–especially as the war continues.

Although the UN can’t bring itself to condemn the US-NATO war, the 2010 report did identify war-related trauma as one of the causes for increased drug use combined with availability of drugs, & limited access to treatment facilities. In the US, the primary treatment for addiction is incarceration–of course, directly related to the war on Black teens. In Afghanistan, media claims there are 100 treatment centers in all of the country with space for only about 2,300 people. They claim the facilities are all funded by “international aid.” Which international aid would that be? The kind that never materialized or the kind USAID/CIA took for payoffs to corrupt government officials?

There’s only one functioning government-run clinic in Kabul with space for 300 people in a metropolitan area of over 5 million people & certainly a high addiction rate. The head of the clinic claimed they treated over 6,000 addicts in the first three years of the clinic & sent them back to society healthy after six weeks. That would explain the sky high relapse rates from the clinic. It also doesn’t help recovery to go back to the same conditions of hunger, unemployment, grief that caused the addiction in the first place.

Truth of the matter is, most Afghan addicts aren’t getting any help at all. The corrupt regime is crying poor mouth about building more treatment centers & the US-NATO regimes don’t give a rat’s ass about suffering Afghans.

The US-NATO war in Afghanistan has gone on long enough insufficiently opposed. It’s long overdue time to rebuild the international antiwar movement to demand “US-NATO out of Afghanistan!” Our deepest regrets we have thus far been unable to restrain the barbarous hold of US & European militarism.