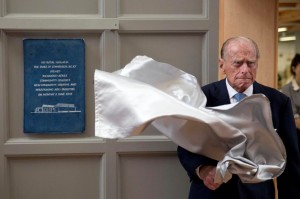 Flatulent Phil is expected to do something for living on the dole but it doesn’t mean he has to like it–especially if it means money expended on plebeians better spent on his indolent clan.

Here our man is unveiling a plaque for an art, drama, & dance school opened in his name (groveling is part of feudal relations) & he is peeved as all-get-out that curtsying is not in the curriculum. Democracy has just gone too damn far. Why should plebeians be taught to sing & dance when his kids can’t even walk in a straight line sober!?

Some will look at this photo & say “You see, money can’t buy happiness.” True it can’t, but it can buy a loathsome Nazi sympathizer & antisemitic lowlife like Flatulent Phil respectability & keep him out of jail.

(PS to those who think my Windsor posts just too lowbrow: get over it!)